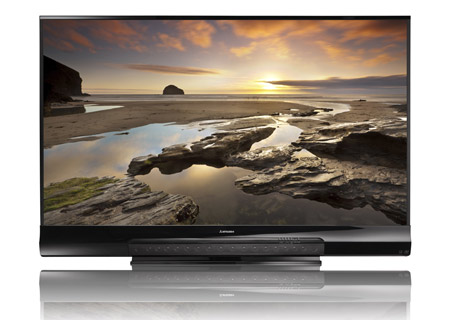 What exactly would be the dimensions of a living room that accommodates a 92” TV? Now, that’s exactly the dilemma the new Mitsubishi 92” 3D DLP Home Cinema TV has put us in. The large screen TV is among the company’s 2011 portfolio of television products which includes the 640, 740 and Diamond 840 series, and the LaserVue TV. Their new ‘Go Big’ strategy is seemingly what’s steered these large TVs for immersive 3D entertainment.

The TVs in the upcoming product line-up are said to employ the same core technology that a host of 3D theatres use for enhanced picture quality. Enhancements and upgrades that up the ante include a Clear Contrast screen and improved audio support.

The Mitsubishi 640 series 3D DLP Home Cinema TV in a 73” screen size features a new cosmetic design. With integrated 3DTV, there’s also a 3D emitter (DLP link and VESA jack). A rich 1080p picture quality and 120Hz sub-frame rate are on offer while 3 HDMI inputs and digital audio out are the included ports. The TV also features an advanced calibration mode along with brilliant, bright, natural, and game modes.

Finally the Mitsubishi Diamond 840 3D DLP Home Cinema TV is highlighted by 92”, 73” and 82” models. 16-speaker Dolby Digital 5.1 integrated IST surround sound system and Bluetooth Audio also mark their presence on these TVs. The audio quality is enhanced by a center channel mode and surround channel outputs. Like the 740 series, it features a Clear Contrast screen and the PerfectColor/PerfecTint too. Incorporated with a sub-woofer, 4 HDMI inputs and a wired IR input, there’s much it appears this series has on offer.