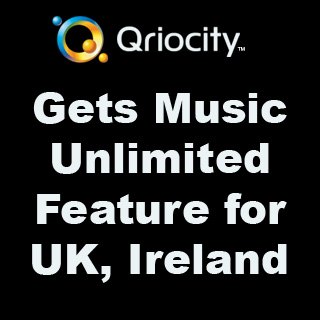 It’s been hardly awhile since Sony slipped the covers off its enthusing Qriocity service in Europe. After powering it with the ‘Video On Demand’ more recently, the company now believes the holiday season to be just the right time to give it an overhaul with the addition of the Music Unlimited attribute. The new cloud-based digital music service will enable music enthusiasts to access a wide range of songs from a number of major labels. This includes Sony Music Entertainment, Universal Music Group, EMI Music and Warner Music Group among many others.

The innovative Music Unlimited function will empower users to play audio on a range of Internet-enabled devices from Sony like the new Bravia TV, Blu-ray disc player, Blu-ray disc home theater system and the PS3. Users can also enjoy music on their VAIO laptops along with a slew of Sony portable devices. Android mobile devices too should be able to enjoy this feature seamlessly.

“As we start to expand Qriocity globally, these services ‘powered by Qriocity’ offer a single ID log-in and wallet solution, and empower users to easily consume content including music and video across a growing number of integrated devices,” commented Kazuo Hirai, President of Networked Products & Services Group, Sony Corporation. “Seamless accessibility to content through these fresh user experiences will enrich Sony’s network service offerings and continually add value to the unique aspects of Sony’s network-enabled products.”

This new addition is a joint effort between Sony and Omnifone. Much unlike scores of popular music services available currently, Music Unlimited is offered in two plans namely Basic and Premium. As part of the basic plan, users can forward skip songs so as to effortlessly unearth their favorite music. They gain access to an expansive archive of over six million songs besides also being able to add personalized channels without any hassles and the infinite ad-free radio station is an option too. The channels are organized by both genre and mood via SensMe.

“Omnifone is delighted to partner with Sony to bring “Music Unlimited powered by Qriocity” to hundreds of millions of Sony and other devices,” mentioned Rob Lewis, Executive Chairman of Omnifone. “Music Unlimited powered by Qriocity” is designed to bring digital music into the homes and living rooms of consumers, as well as to PCs and portable devices, with every user’s music experience synchronized automatically across their devices without needing to manage media files,”

As for the premium subscription plan, users are proffered a 30 day Premium free trial once. With the ability to lend an ear to every song on demand in completion, users will also be able to fabricate their own playlists including their favorite audio. Premium Top 100 channels upscaled on a regular basis is also on offer. The ‘Music Unlimited powered by Qriocity’ service is said to pick correctly on users’ music preferences to serve up music channels that should suit them best. Listening more frequently will allow users to personalize their music channels even more.

The service also enables users to sync their prevalent music playlists and files from media players like iTunes. It is slated to hit the U.K. and Ireland initially followed by the U.S., Canada, Germany, France, Italy, Spain, Australia and New Zealand during 2011. The Basic and Premium monthly subscription plans are tagged at £3.99 in the U.K. and €3.99 in Ireland, and £9.99 in the U.K. and €9.99 in Ireland respectively.