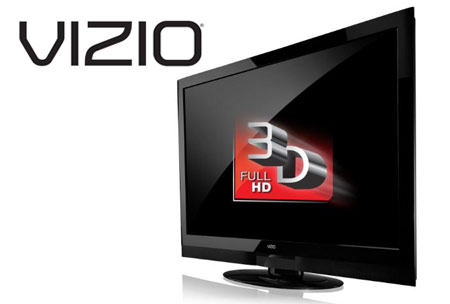 When Vizio dropped off its XVT line-up in June 2009, multimedia enthusiasts were left asking for more. Yes, it did take an HDTV to turn around heads then as much as its 3D technology that’s holding attention now. Vizio has been kind enough to add some 3D goodness to its HD 3D XVT series TVs. Three fully featured models in 42”, 47” and 55” screen sizes complete with Vizio Internet Apps are revealed.

The HDTV trio sports an intriguing 3D Home Theater ecosystem which wraps in full HD 3D glasses, 3D Blu-ray players, high speed HDMI cables and wireless internet router from the company. Among the many enhanced attributes added to this lineup, users can also watch out for SRS truSurround HD and 480Hz SPS boosting the picture quality.

These entertainment hubs also pack in the Smart Dimming feature and Vizio Internet Apps integrated with dual band 802.11n Wi-Fi. They are spruced up by a Bluetooth remote featuring a sliding QWERTY keypad. Specifically, the XVT3D554SV and XVT3D474SV provide full array TruLED backlighting. The company’s Razor LED backlighting system has been employed in the XVT3D424SV model.

“The Vizio XVT line is an incredible, award-winning product that has earned the title of the best LED LCD HDTV on the market,” added Randy Waynick, Vizio CSO. “We are thrilled to launch our new XVT television campaign featuring Beyoncé a true leader in entertainment and look forward to the upcoming release of our new 3D XVT sets which will continue to set the bar for performance, design, and value, challenging all others to improve.”

Movie lovers should be excited by the VBR333 and VBR334 3D Blu-ray players with wireless apps. The devices proffer seamless wireless connectivity translating to clear 2D and full HD 3D content. A maximum of 7.1 channels of digital surround sound along with Dolby TrueHD and DTS HD are delivered. As for the Vizio dual band wireless XWR100 router, it’s a media-focused equipment tailored for high performance when HD content in particular is being streamed. The fact that it’s optimized for VIA devices only seems to up the ante. It has a simultaneous operating ability on 2.4GHz and 5GHz bands, providing a different network for each band.

Finally, the new HDMI cables from the company house a Smart Chip that improves digital audio and video signals. The XCH606 in particular is about 60% slimmer than traditional HDMI cables. The latest Vizio HDMI cables additionally buttress ‘4k’ 4096 x 2160 resolution and bandwidth of up to 10.2Gbps. Some other functions they support include 7.1 audio surround sound and Audio Return Channel (ARC).