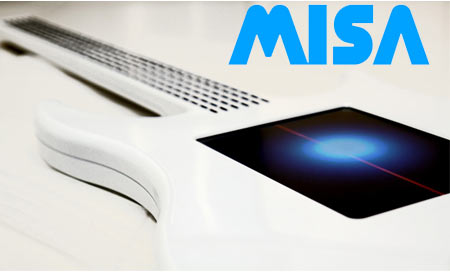 Imagine strumming to a guitar without any strings and through a touchscreen. Think the idea is too far fetched? Well music buffs might just want to chew back their thoughts as the new Misa digital guitar claims to be just this. Working over the natural limitations of a traditional guitar, this new instrument eliminates the need to pluck strings while using the right hand to control sound.

With no intentions of replacing the traditional guitar, the makers also say that it has been fashioned to offer superior electronic music and is nothing like an acoustic guitar or electric guitar. Boasting of a minimalistic interface, the sound module end can be configured seamlessly to make the device simple and effective.

It is bundled with open source digital guitar software powered by the Linux operating system. This will allow programmers to flexibly modify the way the guitar works while even being able to change the interface to offer particular functionality. Essentially an MIDI controller, this digital guitar needs to be plugged into a MIDI capable sound module.

Enthusiasts would want to make note of the fact that the sound of the instrument is supposedly limited by only what is connected to it. Besides the 24 frets and a huge touchscreen, the guitar also reveals Ethernet and SSH server support.

The details on when the guitar would be available are not known. Also its price will be under wraps until the first production run.