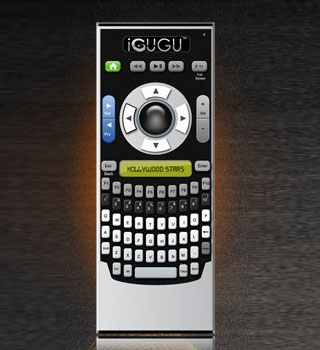 At last week’s CES, technologies and devices highlighting digital content seemed to have been in the forefront. iGUGU revealed a new system dubbed InterneTV that claims to allow digital content from the computer to be delivered to the TV or home entertainment center. With this innovative offering, users can now search, access and enjoy internet based video screen straight on their TV.

Accompanied by a powerful handheld wireless remote control, the new system is PC and Mac compatible. It enables enthusiasts to effortlessly and intuitively view and access computer and internet based digital content on their TV. With this system, users may no longer need to enjoy the volumes on their small PC monitors. Available computer- and internet-based content can be seamlessly experienced on a large screen television.

The compact wireless remote is complete with a full QWERTY keyboard and includes an LCD status screen as well. It also features trackball, direction buttons, media controls, and PC volume controls. With these advanced features, the remote should allow users to easily and quickly download movies and programs while also playing both streamed and stored content via the easy-to-use on-screen interface.

“We’re truly excited to introduce iGUGU InterneTV to the world and we’re confident that it will create a paradigm shift in the world of home entertainment,” remarked Isaac Calderon, president of iGUGU. “With the iGUGU InterneTV solution, users can unleash their computer-based video content from the confines of the computer desk and the small monitor and PC speakers. This easy-to-use system connects directly to any television and enables viewers to search for and play the incredible volumes of video content available on the Internet through our innovative, compact wireless remote control. There’s no need for a separate keyboard and mouse – everything you need is in the iGUGU InterneTV remote.”

Transforming the PC into a robust entertainment center, users can access and play stored video content from the PC. They can also choose to streame content from the Internet on a television or home entertainment center. Comprising of wireless or cable-based options to connect the PC to the television, the system’s boasts of a powerful, and intuitive graphical user interface.

Allowing users to even stream live television content, with the PCTV interface, the system efficiently manages all content between the computer and the television. Three connectivity options including both wired and wireless solutions delivering video at up to 30fps simplify the task of connecting the PC to the television. With iGUGU’s Molecular Wireless, users are delivered wireless connectivity between the TV and a Wi-Fi enabled PC at a distance of up to 400 feet using an 802.11g-compliant box. This offers both VGA and HDMI video outputs along with stereo audio output connections.

Users are provided connectivity of 50 feet thanks to iGUGU Mid Range. Via a VGA cable, it uses a wireless USB that is connected to the PC to communicate with the wireless remote. As for the company’s Long Range, it allows transmission of audio and high-definition video up to 330 feet between transmitter/receiver boxes connected between the computer and television. Compatible with Windows, InterneTV supports 480p and 720p and offers resolutions of 640 x 480, 800 x 600 and 1024 x 768.

Backed by a 1 year warranty and 24/7 technical support, iGUGU InterneTV is expected to release worldwide in Q1 2010 for $79.