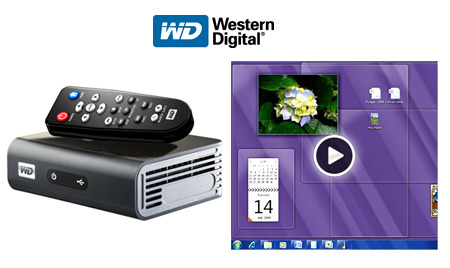 Advanced features and functions across a host of home entertainment gadgets today appear to have pushed the envelope a little further. WD augments this space by offering multimedia enthusiasts an innovative way to move media from their PC to their TV or home theater systems. The company announces that its WD TV Live HD media player is now the first network media player that offers compatibility with the Windows 7 system.

The player comes complete with network capability and full HD 1080p resolution. It’s ‘Play To’ attribute should allow users to stream music, videos and picture files housed on the PC and home network to their big screen TVs. The feature enables users to initiate and control the streaming of video, music or photos to the media player and any other home entertainment systems from any Windows 7-based PC on their network.

Users can now effortlessly play media stored on USB and network drives or any PC on the home connect. They can also seamlessly play content from websites. By simply clicking on the file name in the folder or straight from within Windows Media Player 12, users can select the media player as their playback device. They can play any compatible media file accessible from the PC.

“Microsoft is pleased that Western Digital has earned the Compatible with Windows 7 logo and is supporting the Play To feature with WD TV Live HD media player,” commented Mark Relph, senior director, Windows Ecosystem Product Management at Microsoft Corp. “Now more than 100 million Windows 7 customers will have an affordable and easy way to play files to their HD TVs and other devices from their PC.”

“We regularly engage with WD TV Live enthusiasts in our online community. Many have been asking for a way to ‘push’ media from their PCs to their TV or home theater system, especially from laptops. With the new Windows 7 Play To feature, users can select music or movies from their laptop and play it on an HD TV connected to a WD TV Live HD media player, whether the HD TV is across the living room or in a different room altogether,” added Dale Pistilli, vice president of marketing for WD’s branded products group.

With an Ethernet port for wired and Wi-Fi connection support, the player reveals the ability to transform any USB drive into an HD emdia player. Users can gain an unlimited media collection by simply adding more USB drives. Boasting of two USB ports that allow seamless media playback from multiple USB drives, the players’ media library feature garners content on all the drives and sorts them into one list based on the media type. With a Picture Transfer Protocol, the media player also wraps in superior navigation options.

With file copying between USB devices, the player allows photo and movie viewing along with music playback. The Windows 7 compatible device further includes an HDMI 1.3 port, composite video and component video output and a SPDIF digital output. It’s super-compact fabrication will allow the player to suit any home entertainment setting.