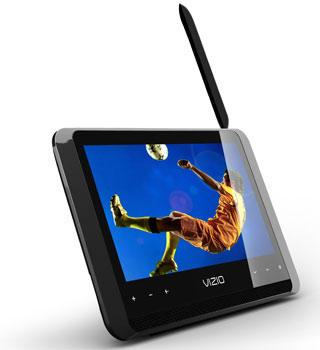 The VMB070 Mobile Razor LED mobile TV has a 7” display and a depth of 3/4”. The LED backlit screen sports 800×480 resolution and high level of brightness at 250 nits. The device is strewn with innovative touch sensitive controls and a flush antenna for better reception of ATSC and NTSC broadcast signals. It also includes auxiliary audio and video inputs as well as headphone jack for DVD players. The Energy Star product comprises of an internal battery that provides up to 3 hours of operation. The complete dimensions are 8.2” x 5.75” x .75”.

“From our enormous base of enthusiastic customers, we see a solid set of end users ready to embrace the idea of viewing on the go, and these new mobile Razor LED TVs are the ideal solution. Being one of the first to market with the latest in mobile video technology is a perfect example of Vizio’s ability to deliver the newest and most advanced technologies to the market, and these products have the performance and value that our customers have come to expect,” explained Laynie Newsome, Vizio Co-Founder and VP Sales and Marketing Communications.

The VMB100 and VMB090 Mobile Razor LED LCD TVs sport 10 and 9 inch displays respectively. They include a tuner which can receive broadcast signals via the new mobile ATSC-MH format and ATSC and NTSC signals as well. The LED LCD panel includes a resolution of 800×480 pixels and high brightness at 350 nits. These products too comprise of touch sensitive TV controls and internal antenna. Through the USB 2.0 port, users can listen to MP3 audio and view JPEG photos. The VMB100 and VMB090 are Energy Star rated and operate up to 3 hours on the internal battery. The dimensions for the VMB100 and VMB090 include 11” x 7.5” x just under 1” and 10” x 7” x just under 1” respectively.