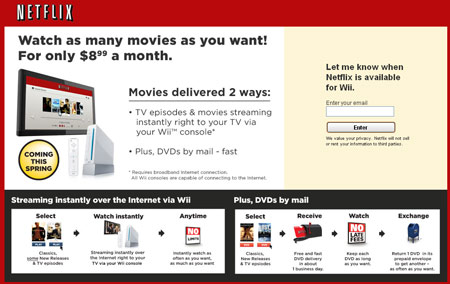 After being available on Sony’s PS3 console, Netflix is all set to debut on the Nintendo platform. Yes, Wii owners in the U.S can gear up for yet another innovative service coming their way. A recent announcement from Nintendo reveals that the company’s Wii console is all set to gain access to the extensive Netflix online movie rental service.

With this introduction Netflix members who are also owners of Nintendo’s Wii console will be able to instantly watch thousands of movies and TV episodes that have been streamed from Netflix directly to their TVs. The two companies have partnered to expand content streamed from Netflix to the Wii console. With the growing poularity of the Wii, Netflix movies should certainly reach a wider audience.

“Our research shows that 86 percent of all U.S. Wii consoles are located in the living room,” commented Nintendo of America President Reggie Fils-Aime. “The Wii console is the social hub around which friends and family members gather to play games and have fun. Soon both new and longtime Wii owners will enjoy the benefits of Netflix – and a variety of informational and entertainment options – by being Netflix members and connecting their consoles to the Internet.”

“Our goal is to offer Netflix members as many ways as possible to watch movies and TV episodes streamed from Netflix right to their TVs and to give non-members more and compelling reasons to consider the service,” added Netflix co-founder and CEO Reed Hastings. “Joining forces with Nintendo, which has been so immensely popular with consumers since its introduction, is a very meaningful step in that direction.”

Wii users can now stream content from Netflix with the help of the Netflix instant-streaming disc for the Wii console. This will be available at no additional costs to subscribers of Netflix and it looks and operates just like a disc-based Wii game. Intended to make the entire user experience natural and intuitive to Wii console owners, the disc can be reserved by Netflix members and Wii console owners right away through the Netflix website.

On inserting the instant-streaming disc into the Wii system, users will gain access to a host of movie and TV choices supposedly displayed on the TV screen. The titles are expected to be traditionally organized into an array of categories on the basis of personal preferences. It should also include popular genres, new arrivals and members’ individual instant Queues. Equipped with the Wii Remote controller, users will also be able to select a movie or TV episode so as to watch it from their instant Queues. With an ability to read synopses and rate movies, users can also fast-forwarding and rewinding their selection.

In addition to this, Netflix also claims to add another attribute to Wii’s varied online features. Ranging from downloadable new and classic games in the Wii Shop Channel, users also gain seamless access to online multiplayer gaming with games like Mario Kart Wii. Besides video highlights and information about titles for the Wii and Nintendo DS systems through the Nintendo Channel are also on offer.

This spring, Netflix is scheduled to go live on the Wii console in the United States at no additional cost to Netflix members who have a plan starting at $8.99 a month. All users require is a Wii console and a broadband Internet connection with discs bieng delivered for free by first-class mail.