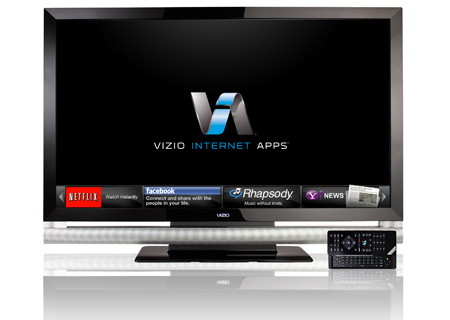 ‘And it does this too’ – is probably one of the most attention grabbing lines manufacturers can entice gadget buffs with. Building devices that serve multi-purposes have always been a popular idea. Vizio has released three XTV series LCD HDTVs called VF552XVT, SV472XVT and SV422XVT. The devices embrace VIA Internet Apps with in-built 802.11n dual band connectivity and Bluetooth universal remote control.

“VIZIO is excited to announce our highly anticipated launch of VIA Connected HDTVs into the market. Enthusiasts on our extensive VIP waiting list will be the first to experience the advanced features and participate in the creation and development of new features,” remarked Laynie Newsome, Vizio Co-Founder and V.P. Sales and Marketing Communications.

The audio system of these HDTVs is supported by SRS TruSurround HD and SRS TruVolume. Each are sold with a Bluetooth universal remote control with sliding QWERTY keyboard that lets owners type in and interact with applications without needing to point the remote at their TV sets. It may be used to control other A/V devices connected to TV like a DVD or Blu-ray player, STB and so on.