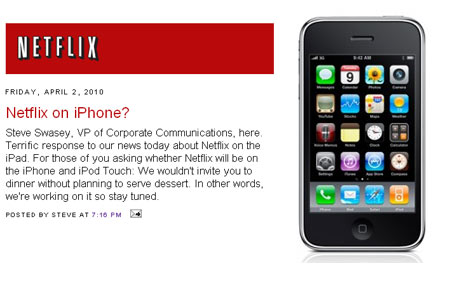 With the iPad being the current flavor of course Netflix couldn’t have possibly left out support for the device. Netflix fans though seem to have a double treat in store. The company revealed that an application for the iPhone and iPod touch is also currently underway.

The wait seems to have been finally over for iPhone owners. With very little decipherment actually needed, we’re certain most iPhone owners are probably already up on their feet. The company is presently working on an application for both the iPhone and the iPod Touch.

In Steve Swasey, VP of Corporate Communications, own words there seems to have been a great response to the company’s news about Netflix reaching the iPad. Pepping it up a little more, he says ‘We wouldn’t invite you to dinner without planning to serve dessert.’

Well, this sounds pretty exciting. Earlier in January, Netflix had arrived for the Nintendo Wii. It’s ‘soon to be available’ status for the iPhone as also being enabled for iPad sure seems to up its quotient.