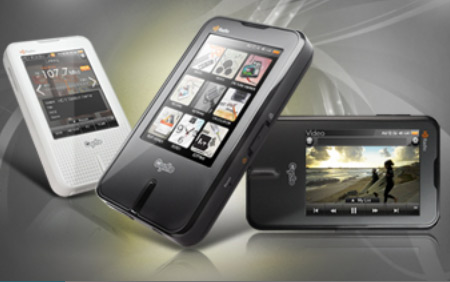 After Ford, it is Cydle’s turn to roll in their car entertainment systems to accompany those weary of being stuck in those seemingly interminable traffic jams with not much to do. At the upcoming CES 2010, Cydle will take the covers off another addition to their P29 series dubbed P29A which is a car-based entertainment system that combines a multimedia player with Mobile TV.

The media player hosts a high-resolution 2.9 inch touchscreen and intelligent interface. It displays information on the track being played such as lyrics, images and artist names. The device’s navigation and entertainment capabilities comprise of GPS, live HD radio traffic updates, Bluetooth, Wi-Fi, black box, Mobile TV, rich multimedia and so on. It integrates the ASTC digital standard for Mobile TV technology, with channel availability being contingent on location.

“With the Cydle P29A, Cydle is in the forefront of the budding Mobile TV revolution. The P29A is an elegant, extremely portable way to catch the news, a favorite program, or enjoy movies on the subway, a bus, or literally anywhere. And we’ve worked to ensure that audio-visual quality is absolutely first-rate, so consumers sacrifice nothing for portability,” remarked Woody Lee, U.S. director of sales, Cydle.

Apart from a stopwatch, calculator and world clock with alarms, Cydle’s newest offering also possesses a Photo Viewer that displays thumbnails clips to enable speed searching of an image. This system is equipped with voice recording abilities for quality sound and convenient file management through a personal voice record box called My Records and an in-built microphone.

Cydle’s P29A will be out sometime during the first half of 2010 for approximately $199.