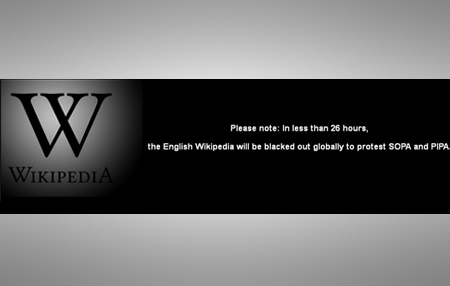 On January 18, that’s tomorrow, the English website of Wikipedia will black out and remain inaccessible to users for the next 24 hours. This action is being employed by the organization to protest against the Stop Online Piracy Act (SOPA) and Protect IP Act (PIPA), which are proposed legislations in the U.S. House of Representatives and the U.S. Senate, respectively.

Along with some other websites who are expressing their displeasure over the proposed legislations in a similar fashion, the English fraction of this online encyclopedia will begin to shut down at 05:00 UTC on Wednesday, January 18. This will be the first ever public protest made by the organization in this manner.

“Today Wikipedians from around the world have spoken about their opposition to this destructive legislation,” conveys Jimmy Wales, founder of Wikipedia. “This is an extraordinary action for our community to take – and while we regret having to prevent the world from having access to Wikipedia for even a second, we simply cannot ignore the fact that SOPA and PIPA endanger free speech both in the United States and abroad, and set a frightening precedent of Internet censorship for the world.”

The aforementioned bills in question were proposed in late 2011. While legal scholars argue that these will transform the way information is shared on the internet, Wikipedia has expressed the opinion that these acts would have devastating effects on the free and open web.

Wikipedia administrators have also requested users all around the world to express their disapproval against the act. In support of this, the German and Italian counterparts of the English Wikipedia as well as Wikimedia Commons, are also considering putting up banners on their web pages.