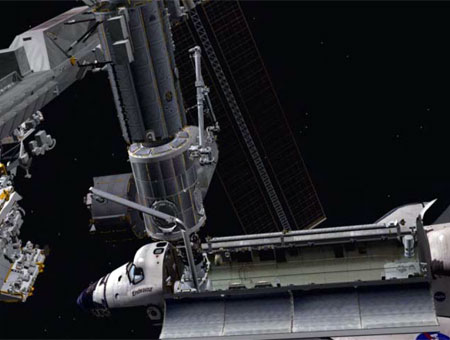 The International Space Station (ISS) has come a long way from 1998, the year they started work on the orbital outpost. The National Aeronautics and Space Administration (NASA) had launched the Endeavour space shuttle from the Kennedy Space Center in Florida earlier this week and now it has emerged that Endeavour has successfully with the ISS.

The docking between the space shuttle and the ISS wasn’t an easy affair as Dominic Gorie, who is the shuttle commander had to navigate it through a back-flip maneuver an hour before docking as the crew of the outpost clicked many pictures of the underbelly of the space shuttle. After the docking was done, they rang a bell on the International Space Station, a ritual that has been borrowed from nautical practice.

The mission of Endeavour space shuttle was to deliver astronauts as well as a Japanese space lab, Kibo. They will unload a storage and equipment module for the Kibo laboratory. The crew, which consists of seven members includes Japanese astronaut Takao Doi, will also be working to install a two-armed robot built in Canada. The Canadian-built arms will be used to fit and service components.

Endeavour space shuttle mission to the International Space Station is sixteen day long. Garret Reisman, who is part of the crew, will be staying on the orbital outpost. But Frenchman Leopold Eyharts will return to Earth with the Endeavour. Besides installing the robotic arm and delivering the Japanese space lab, the crew will also experiment with a heat-shield repair system during one of five planned space walks.