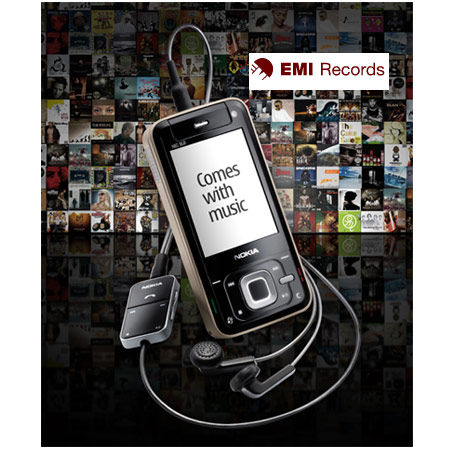 We may soon heare some awesome music from record label EMI’s massive catalogue, on our Nokia mobile phones.

EMI has openly revealed that it is in negotiations with mobile phone giant Nokia to have music from its catalog offered through Nokia’s latest “Comes with Music” program that is to be offered on a few Nokia phones.

With Nokia’s “Comes with Music” initiative, customers who have recently gone in for a Nokia handset will be able to gain access to a music catalog of millions of songs. To enjoy the music, consumers need to go in for a one year subscription plan.

Reportedly, Nokia is in the works of selling mobile phones bundled with Comes with Music beginning in the second half of 2008. EMI’s Finland head Wemppa Koivumaki anticipated that his company’s music would be in place for the official “Comes With Music” launch in the latter half of 2008.

“We want to be part of it,” maintained Koivumaki. “I believe strongly that when it launches we will be there, with a full offering.” Till now, Universal is the only record label that is a part of “Comes to Music”. Apart from EMI, Nokia is apparently also in talks with other leading music brands to have their artists join the service. However, what’s holding most labels behind is the unique subscription model.

Interestingly, even after the termination of the one year subscription period is over, all the songs downloaded on to the phone will remain exactly as they were. Even if a user plans to not renew the subscription, the songs won’t be deleted. In addition, users can also transfer the songs directly onto their PC. Music companies get as much as $80 per device sold.

Now what seems to be like a cherry on the icing for music lovers is that there are reports stating that Apple too is keen to work with music companies to offer a subscription plan on the same lines for its iPod family and iPhone handset. However, as of now there have been no official statements from the company on the same.