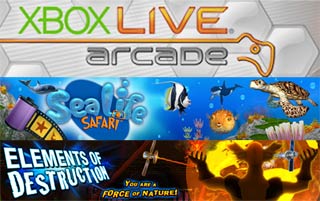 The Elements of Destruction game will throw the player in the mold of a bitter, unemployed research scientist, who plans taking revenge on his former employer with the support of the forces of nature which are controlled by a weather control machine. Control earthquakes, tornadoes and lightning which will cause a huge amount of destruction all over. The mad scientist can shake down buildings with earthquakes, get down an aircraft with just a strike of lightning or throw or engulf materials using tornadoes.

The Sea Life Safari on the other hand is an easy to play game which involves taking a dip underwater and exploring through various maps and destinations. The game involves five underwater destinations which are filled with 60 types of marine life. The players will be able to click photographs, explore the Coral reef, unravel secret routes, hidden items and face special appearances and rare night-time creatures.