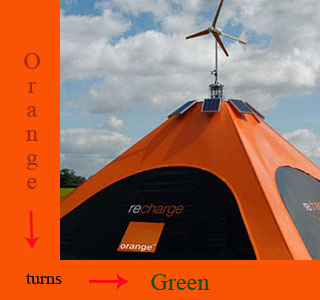 The Glastonbury Festival which is the largest greenfield music and performing arts festival in the world will feature Orange’s Eco-Friendly Mobile Phone Recharging pod this year. The large recharging pod charges up mobile phones using the wind energy and solar energy which saves power and causes no harm to nature.

Orange plans to place the green device on display at the Glastonbury Festival, also known as Glasto. The recharging pod is around seven metres in height and is powered by a wind generator and solar panels. The huge device combines two natural forces of energy to charge up mobile phones. The huge tent claims to charge upto one hundred mobile phones every hour.

Orange’s creation received support from Gotwind, a renewable energy company who made this huge green piece of invention. The device will be placed the Pennard Hill camping ground at Glastonbury and one can charge their mobiles free of cost via the recharging pod.

Since the device is huge, it may be useful for public use during festivals and parades. Hope mobile companies and carriers take a leaf from this and come up with innovative ideas where a smaller device could charge up our phones in an eco-friendly way.