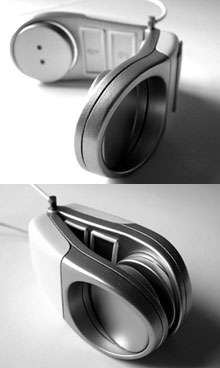 Mobile phones choose two paths for themselves; either lead themselves to the future or go back to the retro style. The Easy Mobile Calling phone concept plans to go for the latter option with a simple working and only four keys for operation.

The phone plans on featuring only 4 keys of operation for a simple and easy-to-use interface. The keys include four keys direct calling, one-touch calling and GPS tracking. The phone has a different clamshell look which also looks compact and small. The Easy Mobile Calling device will also pack in a built in speaker phone for those entertainment requirements.

The phone seems to be an ideal pick for those who are currently struggling with their 3G complex phones and crave for a simple phone that will be best for the basic functions like making and receiving calls. The pricing details or the manufacturing details have not yet been revealed but this seems to be a blessing to the elderly who have to struggle with the complex futuristic phones.