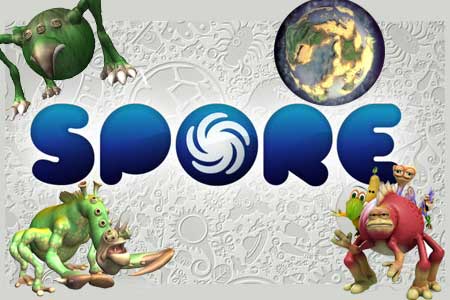 Ever wished to know as to how we evolved? Ever wished to get back into pages of history? If the answer is ‘Yes’ then we are sure, this is one game you are going to enjoy. We are speaking of EA’s much-awaited game Spore. That’s right! We finally managed to try our hands and claws on this exciting game.

Spore surely takes you back to the stages of evolution and gives you an insight of the various stages that the various species had to go through. ‘Unique’ and ‘innovative’ are the two words which describe the game best. Who would ever think of developing a game that takes you into the stages of evolution in a species life cycle? Spore as a game can definitely get very engrossing and addictive.

Spore begins with the Cell Stage which involves attacking other living beings and eatable items. The player gets the options either to be an herbivore, carnivore or omnivore. One can even mate and bring in a new life into the game. There are certain stages where the game hits the monotony levels and it gets repetitive, but as you progress further, the responsibilities and game rules shift to a completely different arena. 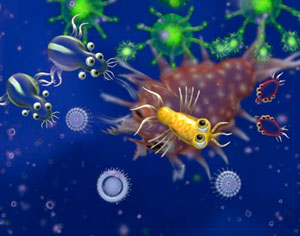 The Cell Stage and Creature Stage involve mostly eating and mating. The game involves swimming through waters and battling other creatures who are on an eating spree themselves. One can customize the creature as per their requirement, add in various body parts which will enable one to battle the predators and face the world daringly. This truly displays the concept of ‘Survival of the fittest’. 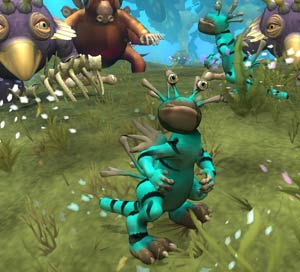 Now is the time to get out of the water and head to the shores. The Cell Stage has passed away and you no longer require swimming as the game takes the player on to the lands. Now the little cell grows into a creature and the creature can crawl on to lands and gets to mate and start a family of his own. This stage will let the player either combat or fight with other species on the land.

The creature can also get the required energy from the fruits and trees that grow on the ground. The first two stages, namely Cell Stage and Creature Stage pass very quickly and it can get very easy to play. As compared to the Cell Stage, the Creature Stage can be a better entertainer for sure. 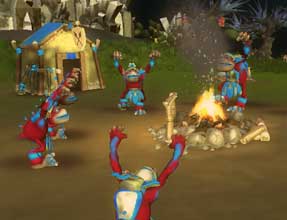 Now get ready to wear on the tribal masks and tribal gear that will get you ready to socialize, hunt and gather food. The Tribal Stage is a one step closer to mankind and it has given the species a brain that can think, hunt, socialize and start a family/tribe of their own. Customization in terms of looks and power has been seen all throughout all stages of the game.

This stage involves a bit of strategy and planning. The player gets to add in new members of their own sect to the tribe. But with an addition of a new baby it brings in additional responsibility as well. So one has to hunt and search for food to feed the tribe. While you search the food, animals and other tribe members can raid your food supplies and even kill your babies. So, one has to plan carefully so that their tribe doesn’t get harmed in the process of hunting.

One can even socialize with other tribes and domesticate pets to keep up the good relations. The game cannot be complete with all the sweetness and to add in challenge to the game, the tribe has to fight other tribes and erase out all their members and even destruct their main hut completely. 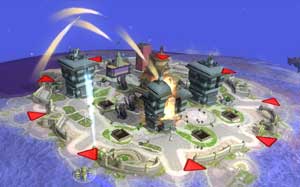 Next time comes the Civilization Stage which gives an advanced view and brain to the man. This stage sure gets Spore interesting and involving. The players get involved in city hall which is the centerpiece and factories, houses, and entertainment structures are built around it. The game again involves a lot of strategies and planning.

The player gets to decide whether his/her city is a rich money-making system or a regular/moderate income generator. One gets to develop their city as per their requirement and later on one can capture other cities and sects. The stages from Tribal Stage onwards take some time to complete and it gets quite addictive as well. 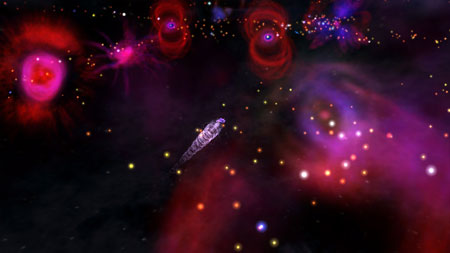 After the land is captured, players now have the options to explore the space and galaxies. The Space Stage will introduce you a wider variety of species and planets. Spore again follows the same concept, where the player can either combat the species into a fight or commit friendship. At certain points, this stage can get confusing, especially with a missing map one has to explore the areas and remember the places visited.

This stage also involves challenges thrown in by other species, where if a player wishes to be friendly with them, they have to please them by getting a particular herb/plant/ object from a different planet and the exploration sure can get you engrossed in the game.

Looking at an overall view, the Spore game can be a great entertainer and it can drown you in its addictive gameplay. As stated time and again, the game surely has been developed in a very innovative and creative way. The visuals and graphics used are quite crisp and attractive to the eye.

If the Space Stage included a map, that would have made it easier to maneuver through the various galaxies and planets. In totality, the game is quite impressive and unique. It moves the mind from the cliché shooter games and stands out differently and successful, this proves the reason as to why more than a million copies of the game were sold retail worldwide. As far as our rating is concerned we give it a: