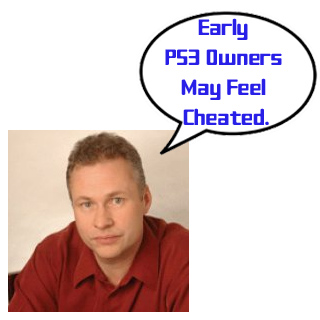 Apple’s iPhone isn’t the only device that has had disappointed early buyers, thanks to the price cut. The same is the scenario with pretty many other gizmos too.

There is no doubt that PS3 is the most steeply priced next-gen console and this had a direct effect on its sales. That’s when Sony realized the need to drop the PS3’s price. But how well has this gone with the early PS3 owners? Obviously now well!

In an interview with GamesIndustry.Biz, Sony’s Ray Maguire admitted that the console’s early adopters might have felt cheated.

He maintained, “I think it’s natural to feel that way, of course it is. The difference between our industry and many other industries is that if you’re selling cars or houses the price goes up steadily. Consumer electronics only goes one way and that’s downwards. One thing is common amongst the entire market for consumer electronics and that is that there are early adopters like myself who will spend GBP 10,000 on a plasma TV that is worth GBP 3000 within three years. That’s the way the market goes.”

For a fact, the lack of great gaming titles makes this pain all the more sore. Do you own Sony’s PS3? If yes, and you too feel cheated, then do drop in your comments here!