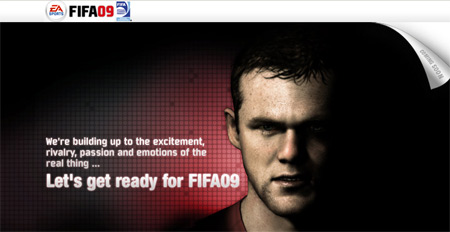 Electronic Arts has announced that the FIFA Soccer 09 has been designed and customized to offer better gameplay experience. The latest FIFA Soccer 09 game will be available in Autumn on various platforms including PlayStation 3, Xbox 360, Nintendo Wii, PC, PlayStation 2, Nintendo DS and Sony PSP.

FIFA Soccer 09 for the PS3 and Xbox 360 features more than 250 additions and enhancements to core gameplay. It allows gamers to customize the game according to their style and ability. With new Custom Team Tactics, game provides players, all the tools to be the coach of their teams. Gamers can adjust and customize tactical settings so CPU players and the team perform just like the real-world team plays. The teams can virtually make strategic decisions to exploit their opponent’s weaknesses.

Moreover, Be A Pro feature has been extended to a career mode called Be A Pro: Seasons, wherein gamers can choose or create a professional player and then develop his skills at a single outfield position over four years with the ultimate goal of becoming a national legend.

Also features such as crowds, stadium atmosphere, linesmen on the pitch and also the commentary are deliver a real life experience.

“We have listened and responded to gamers and soccer fans around the world by building customized gameplay experiences for FIFA Soccer 09 on each platform,” said Andrew Wilson, Vice President and Executive Producer for the franchise. “Everyone wants to play a soccer game that is customized to their system and delivers a unique and enjoyable experience. We understand that and have innovated features, created new modes and designed controls that are tailored to each specific platform.”

FIFA Soccer 09 can be played by two ways, 11 vs. 11 simulation and 8 vs. 8 arcade action on the Nintendo Wii. The game can be enjoyed with within a stylized environment with Mii versions of superstars, like Ronaldinho and Wayne Rooney.

Though no release date of FIFA Soccer 09 has been announced, the game is scheduled to launch in Autumn. Even the pricing and rating details are to be announced as of now.