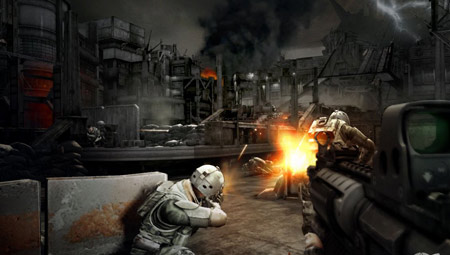 Sony Computer Entertainment America has officially announced that its PlayStation 3 exclusive game title ‘KillZone 2’ will see a 2008 release. This announcement was made at the ongoing E3 media event in Santa Monica.

Killzone 2 throws players back into the midst of a hostile and dramatic ongoing battle between the ISA and Helghast army.

Although the game follows events and action from the original Killzone for the PS2, Killzone 2 now sets a new standard for next-generation gaming wit the deliverance of lifelike characters, highly detailed and destructible environments, realistic physics and advanced AI levels.

According to Phil Harrison, president, Sony Computer Entertainment Worldwide Studios, “There have rightly been high expectations for Killzone 2 since we shared the vision for the title back in 2005. Guerrilla has worked hard to focus the power of PS3 to realize their true vision for the game. With incredible action, drama-fueled gameplay sequences, and a vast array of weapons and vehicles, Killzone 2 defines a new benchmark of our industry.”

Killzone 2 for the PS3 has an extensive, story-driven single player mode. The game also features a thrilling multiplayer mode.

The environments in Killzone 2 are most notable. For instance, the game features highly atmospheric environments that respond accuratelt to weapon fire as players storm through the world of Helghan.

Besides, the harsh climate and conditions of Helghan is also an obstacle, forcing players to use new tactics to survive.

Killzone 2 also supports 7.1 surround sound with location-specific audio, giving players the chance to experience sound and music that are not only dynamic but also in context to indoor and outdoor locations.

Killzone 2 for the PS3 has been developed by Guerrilla Games, a wholly owned subsidiary of Sony Computer Entertainment. The game is expected to come out some time in 2008.