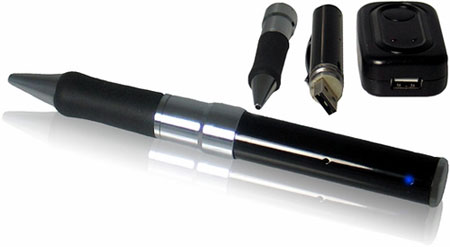 If you always dreamt of fitting in the shoes of a secret detective and always wished to record in a sly manner, then try out the DVR Pen Camera Recorder which not only records Audio but also Video.

The device looks like any other pen, but a little larger than the standard ones. The DVR Pen Camera Recorder records in a resolution of 352×288 and the camera quality hasn’t been mentioned. The recorder features in 2GB or 4GB of flash memory and stores on its internal memory which again provides options of 2GB or 4GB storage.

Fit in to the role of James Bond with One button recording of the recorder. The DVR pen Camera Recorder weighs only 30g and measures 150 x 15 x 15 mm. The device has a Lithium-ion 180mAh battery which provides a recording time of 2 hours. Approximately 30 hours of audio and video can be stored on the 4GB model.