Dual SIM Samsung Galaxy S5 unveiled for China, will it hit other nations?

On road to the biggest smartphone launch of this year – that of the Samsung Galaxy S5 – we have word of a fresh dual SIM variant of it has been launched in China. This model will also be released on April 11 like its other versions, but will be exclusive to China Mobile.

Dubbed G9009D, it will provide support for CDMA 200 and GSM SIM cards. Samsung chose to take a quiet approach with this launch, hence it’s unclear whether or not it plans on releasing it in other markets. Since dual SIM devices are in huge demand in emerging nations like India, we wouldn’t be surprised to see this model of the Galaxy S5 being released in such territories. 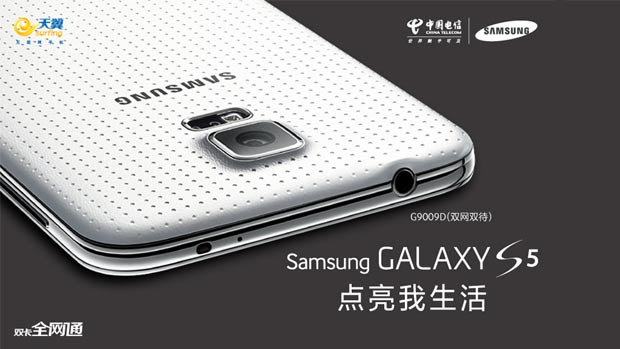 The G9009D is virtually the same handset if the dual SIM slots are excluded. It features the Snapdragon 801 setup, a 16MP camera, a fingerprint sensor, a heart rate sensor and many more advanced specs. On its front rests a 5.1-inch 1080p full HD display.

Like we said, the dual SIM Samsung Galaxy S5 is a China-exclusive device at the moment. It can be pre-ordered now at 5,299 Yuan (approx. $850). We’re trying to dig out more on whether the company has plans for launching a similar model in other nations or not.

Until then, you can have a look at the specs of the dual SIM Samsung Galaxy S5 here:

Facebook
Twitter
Pinterest
Linkedin
ReddIt
Tumblr
Flip
Previous article
HTC 0PAJ3 leaked with beefy specs, is it the Butterfly 2?
Next article
C Spire to bring the Samsung Galaxy S5 to the US next month