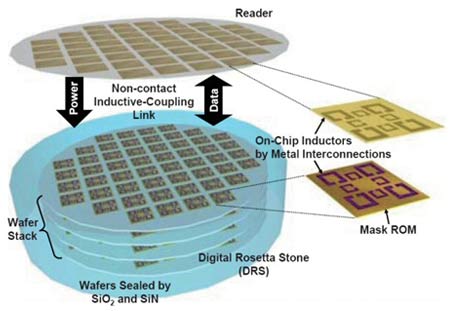 To safeguard the digital information for generations to come, Japanese researchers bring into light a prototype of memory system that is capable of storing ample of data for over thousand years. This new creation called the Digital Rosetta Stone (DRS) was announced at the 2009 Symposium on VLSI Circuits, says Techon.

The system has been developed by Keio University, Sharp Corp and Kyoto University. The new system consists of stacked wafers that have been mounted with mask ROM and are packaged with Silicon Dioxide.

The system has been created to take down the precious and critical digital data that has been preserved by mankind. It is said to protect the critical data for about thousand years.

Reportedly, due to magnetic field, the data stored in HDDs can be lost in about 40 years while the data stored in optical disc could be lost in 30-100 years if affected by oxygen or moisture. Well, semiconductor devices are capable of preserving the data for a thousand years and above, by maintaining the humidity around the chip at 2 percent or below.

Keeping these things in mind, researches say that data can be saved on mask ROM with electron-beam direct-writing technology. Thus, stacking wafers and packaging using SiO2 which eventually forms a slate. On attaching a wafer (reader) for reading data, it enables to communicate signals as well as supply power by wireless. On stacking four 15-inch wafers built using 45nm CMOS technology, it offers 2.5 Tbits of memory capacity.

The researches prototype includes 5mm x 5mm test chips which have been developed using 0.18μm CMOS technology. By successfully providing 56mW power to the slate through four-channel wireless transmission with a distance of 0.2mm between the slate and the reader. This has resulted into data transmission speed of 150Mbps.

Well, we hope this prototype makes its way to the markets.