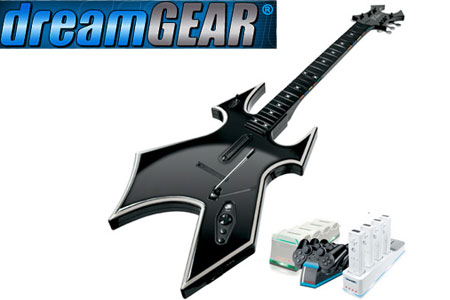 Music centric games proved to be quite a rage in the past year. With this target audience in mind, DreamGear has launched a new Warbeast wireless guitar with quad chargers for the PS3. The game console accessory company revealed that the Quad Dock charging station will support PS3, Nintendo Wii and Xbox 360 consoles.

As for the Quad Dock charging stations, it will enable users to charge up to four controllers simultaneously. Though Nintendo Wii already uses these kinds of chargers, it is the first device for the PS3 and Xbox 360 consoles.

While for the former version there is a spot to recharge four AA batteries in the Fit balance board along with four additional spots for the controllers, owners of latter consoles will need to remove their battery packs to plug them into that version of the Quad Dock.

Dressed in black, the Warbeast guitar sells now for nearly $129.99 and the Quad Dock stations will retail for around $30 to $40 each.