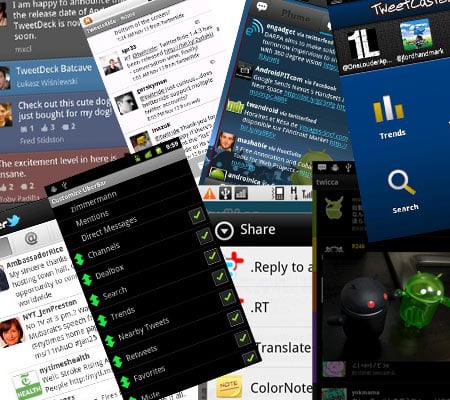 Our compiled list of the Twitter apps for Android phones to download will without a doubt keep the mobile-friendly version afar. Catching up with the Apple App Store, the Android Market appears to be on a roll with the addition of apps and games increasing at a rapid pace. Amongst these, rest a large number of Twitter applications that may personify your micro-blogging experience. Alongside millions of others, users spend most of their free time sharing their thoughts or blogging their interests. And what’s better than having a convenient and fun-filled way of doing so? Our list below includes the 8 best Twitter apps for Android available on the market today.

1 – TweetCaster: Proclaimed as the most downloaded Twitter app on the Android Market, TweetCaster offers its users all basic operation like viewing profiles, sending tweets, clicking links and reading timelines alongside added features like the ‘Zip it’ functionality, integrated retweets, notifications, color code tweets. Also, with the multiple accounts and widgets support, the app makes its appearance as one of the most desirable. Additionally, on making a payment of $4.99, users can enjoy a free app experience on the TweetCaster Pro.

2 – Twitter Official: Straight from the makers of Twitter comes the official Twitter app that brings in a number of features such as browse interests, find and follow friends, tweet, retweet, privately message followers, share photos, videos and web pages. But, what keeps the app’s head up high is the real-time search that reveals breaking news along with trending topics and maps that shows what’s happening around the world.

3 – Twidroyd: The Twidroyd app for Android appears to be one of the fastest growing Twitter apps on the Android Market and has a number of offerings that distinguish it from others in the same line of service. Providing a full-featured Twitter client, the app hosts functions like list viewing, url shortening, geo-location support, multi-language interface, background notifications and LivePreview that displays linked web pages and media right alongside the tweet, instead of being opened in the browser.

4 – TweetDeck: Although this app supports Facebook and Foursquare, TweetDeck seems to be a reliable candidate that allows users to track replies, comments and retweet from the ‘Me’ column. For direct access to friends and favorite celebs in one place, the client sports a customizable speed dial list. What’s more, the TweetDeck application is also officially a part of Twitter.

5 – Twicca: Twicca is yet another Twitter client that gives a pleasant feel with the number of features it has to offer. For users who prefer a neat and clean interface with a number of Twitter functionalities, Twicca appears to be a highly capable alternative to the heavily feature-packed apps available. Also, the client is currently in its beta stage.

6 – Plume: Customization is what gives any application a personal touch and the Plume app for Twitter claims to just do so. Users can share photos with Twitpic, Plixi, YFrog and Posterous, even shorten links with Bit.ly support. Furthermore, the client brings scrollable widgets onto the homescreen that displays users twitter timeline, the swipe scrolling capability, an internal browser and the ‘Pull to refresh’ function.

7 – TweetsRide: For users who prefer a simple interface with basic functions, TweetsRide is just the app they’re looking for. Previously known as TwitterRide, the application supports the auto-scroll option and the OAuth Echo for media services.

8 – TwitPlus: Juicing up Twitter is the TwitPlus that doesn’t pose itself as a standalone client but, an add-on that brings in a few exciting features like the image and video preview for known urls, old style RT, reply to all, save image and set as wallpaper. Additionally, the add-on is said to work on all Twitter apps available in the Android Market.

Comparing each application for Twitter on the Android Market, our aforementioned list states what we would prefer to find in a social networking app hence, tagged as the Twitter apps for Android phones to download. Also, cataloged on basis of their popularity and users discretion, these clients are not only one of the best offered but are unique and distinct in their very own way. But, that’s our opinion. Also, do let us know your views on the stated Android phone apps or any other that keeps you hooked.