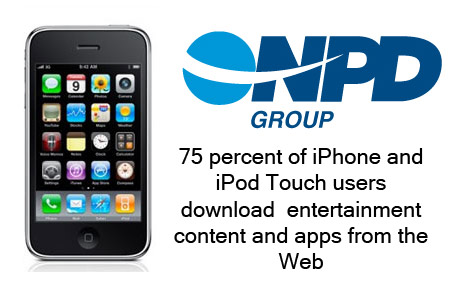 The increasing needs to stay connected and updated on various fronts sure have a lot of us reaching for our phones more often. Over the past few years, consumers downloading entertainment content has surged significantly. Nevertheless Apple users lead the pack when it comes to downloading content from the Web. The NPD Group’s ‘Entertainment Trends in America’ update shares that a large number of content is downloaded by iPhone and iPod Touch users.

As per NPD’s entertainment market research, the statistics reveal 75 percent of iPhone and iPod Touch users picking their devices to download entertainment content and apps from the Web. In comparison only 19 and 17 percent of game console and Blu-ray Disc (BD) set-top product users correspondingly connect to the Web to download content.

“It’s not surprising that Apple users are ahead of others when it comes to downloading Web-based content, given the breadth of the company’s app catalog and the head start iTunes had selling music for the iPod,” commented Russ Crupnick, entertainment industry analyst for NPD. “Like other groups of early adopters, consumers downloading entertainment content are mostly younger and male; however, as app stores expand beyond Apple, as connected devices become more commonplace, and as connectivity is simplified we expect to see more activity on other devices and platforms.”

Additionally, free apps were the most popular download category among iPhone and iPod Touch users which shouldn’t actually come as a surprise. This was followed by video-game apps, and music downloads. Users who connected to the web through game consoles, game add-ons naturally surpassed others as the most popular category. It was followed by purchased downloads of entire games, and movie rentals. Only one-third of BD users were found to actually connect through their BD and they were found to downloaded movie rentals.

“Music now competes with games and other apps for share of device, share of wallet, and share of time,” Crupnick further mentioned “Entertainment companies need to start to thinking of apps in broader terms, not only as a way of garnering direct sales from downloads, but also as a pathway to paying for additional entertainment content. For example, an app that reviews movies could also be a direct channel for purchasing DVDs, BDs, or digital forms of video.”

With a lot of manufacturers stepping it up in the entertainment terrain, this tidbit doesn’t really come as a surprise. In fact the scores of applications unveiled for the Apple App store only seem to be essaying the popularity of entertainment content on the iPhone and iPod touch.