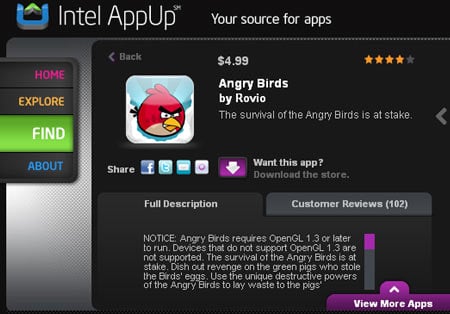 Users can now download Angry Birds for PC operating systems Windows 7 and Windows XP through the Intel AppUp store. We bet makers of the the popular Apple iOS game, the Finland-based Rovio, didn’t think bird-slinging would become such a popular sport when they launched the title back in December 2009 for Apple iOS and recently on Chrome. It’s like no one seems to get enough of assaulting those green pigs who should apparently be feeling very very repentant by now.

When Rovio first announced the download of Angry Birds for PC OS on Intel’s AppUp portal, the company said its final price tag would read at $9.99. But those who didn’t know the game was available until now need not fret. They haven’t missed out on the $4.99 promotional offer which was supposed to run for a limited time. Because the Angry Birds for Windows XP and 32-bit as well as 64-bit Windows 7 PCs is still up for grabs at the $4.99 price.

Sticking to the initial price probably has something to do with the fact that there’s no need to download Angry Birds for PC OS as long as fans are connected to the web since the online version is free to play. So does the PC spinoff beat playing on a touchscreen with the mouse controls and touchpad support? Well, people are always going to have different opinions on this subject and anyone who actually spends time thinking about the game is perhaps bound to download it anyway, whichever version it may be.

Requiring OpenGL 1.3 or higher, the plot is as simple as ever in the Angry Birds game. The survival of the feathered critters is at stake and the green pigs who stole the birds’ eggs must pay the price for it. Offering hours of physics-based demolition gameplay, the title takes players through 225 levels of bird-pelting action. For those who get Angry Birds Rio, it’s an escapade spanning 4 episodes and 120 levels as the birds try to rescue Blu and Jewel from the clutches, or should we say cages, of their devious captors.

“Lemme tell ya, these ain’t no ordinary finches we’re talkin’ about. These here are the Angry Birds, the ones that’s gonna kick you in the ‘nads. And they’re the ones on your side. They must be from Galapadapados, or sumptin’,” is what the magnificent Col. Angus, would say about the game, according to the creators, or the description attached to it at least. When Intel declared Angry Birds Rio was winging it to the AppUp store, the company cited 90 dedicated levels and Rovio stated that the initial game levels would number at 195.

It’d be good to note that after the release of the game download was spelled out on the official Rovio blog, the concerned post was updated with instructions for those who’d been experiencing trouble while launching the game. This followed user complaints about an error related to graphical texture size cropping up. So those who do have problems starting the title may want to install the latest graphics adapter drivers through Windows Update or Hardware Configuration. Of course, Rovio support is always at hand if necessary.

Just to rub it in, Best Buy and Intel had teamed up to extend the offer to download Angry Birds for PC absolutely free from AppUp to 50,000 people in March. Missed the bus, eh?