There’s a lot of discussion about violent video games and their connection to behaviour. One study found that children who play violent video games are more likely to be aggressive, especially when playing as the aggressor. Another study showed that repeated exposure to violence from these games could change the reward systems in the brain. There have been many studies done on how this connection between video games and behaviour is unclear, but there are some interesting points worth considering before passing judgement.

While there is a lot of discussion about violent video games and their connection to behaviour, parents should consider other factors that could influence how their children turn out.

One study suggests that when children play the ‘aggressor’ in a game, they feel rewarded for aggressive behaviour. When playing as the protagonist, players don’t experience such strong reactions to violence and aggression. Researchers therefore believe that playing as the aggressor creates a disconnect between feelings of aggression and empathy, making it more difficult for children to empathize with their victims.

Other factors that can influence behaviour are age, gender, socioeconomic status and the child’s personality. Each of these has some sort of bearing on whether children will behave badly or not. 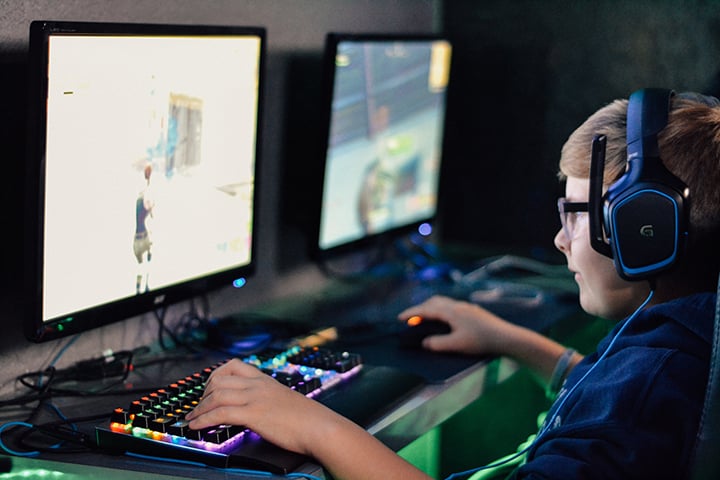 Much depends on how old the children are. Younger children may not be as affected by violent video games as older ones because they don’t fully comprehend the implications of such images. This, obviously, not means that such games are a good choice for such small children. All the games have a proper age limit, but that is for parents to decide if their child is allowed to play a game or not. Sadly, it is common for adults to bend to children’s will and let them play games that are even signed as 18+ because their friends or influencers online are playing them, so the child uses the argument of being treated worse than their classmates that are somehow allowed to play this game. This kind of allowance to overstep the given age limits by parents is contagious and leads to violation of the system. Many online games ban users when they recognize somehow that their age is not suitable for this game.

There is some indication that boys and young men who play video games can become more aggressive than girls or women. It has been assumed that this is down to differences in the way males are shown in games. Men figures are strong, violent and tough, while female characters are often weak and submissive. This creates the idea that women should be passive in violent situations.

A person’s socioeconomic status can also affect their behaviour. Children who come from low-income families may be more likely to behave aggressively because they live in conditions where violence is more common (drug abuse, bullying at school, joining gangs to fight for territory). This does not mean that children from wealthy families are less likely to be aggressive or carry out violent acts; it is just that the circumstances of this behaviour changes.

A person’s personality can also contribute to how they react to such games. For example, someone who has low self-esteem is more likely to be influenced by the violence they see; someone who enjoys feeling powerful may also feel this way after playing these games.

Children and teenagers with higher IQ generally understand that what they see in game is allowed only in the game, and they cannot behave like that in real life. Video games are not reality, but it is an escape from the real world. Video games allow people to test how they would behave in dangerous or different situations that might arise in daily life. Sometimes it is better to be prepared for something that might happen instead of being caught off-guard. Children that are generally really submissive and susceptible to influence are more likely to try behaviour they saw in game in their real life.

Every child is different and should not be judged by the same yardstick. Video games are just another form of art, and people should treat them with the same respect they would any other form of entertainment. Although there is concern that violent video games could lead to undesirable behaviour, research suggests there are many factors which lead to aggression.

Although there are many factors that influence children’s behaviour, violent video games do not appear to be one of them. Parents should consider other possibilities before they blame their child’s actions on a game.

The same pattern as we observe in video games and their impact on violence, we can say about gambling and addiction to it. The gambling games itself are not the source of the addiction because in this way everyone who touch dice or cards or play in an online casino in Ireland, USA, Malta or for example France will get addicted, thinking like that we will have whole societies addicted from gambling. In fact, addiction mainly comes from a person and their personality, and the same is with video games and their influence on the level of violence in the society.