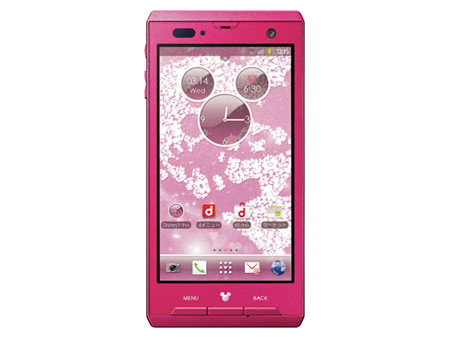 The Disney Mobile on DoCoMo F-08D and P-05D Android handsets that were recently announced, may leave both kids and adults starry-eyed. The phones in the aforementioned pair, which is the outcome of the collaboration between The Walt Disney Company and NTT DoCoMo, flaunt water- and dust-proof exteriors for rugged use.

Sitting atop the high end rung amongst the two, is the DoCoMo F-08D device which dons a 4.3-inch HD TFT LCD display and proffers resolutions of 720 x 1,280p. The embedded OMAP4430 1.2GHz dual core chip powers the handset while the onboard battery provides the juice for up to 330 minutes of continuous talk time on 3G networks. Its rear panel sports a 13.1MP camera, while its sleek 8.8mm chassis is expected to come wrapped in shades of shiny pink or shiny white. Pre-loaded with a 2GB microSD card, the external storage can be expanded up to 32GB. 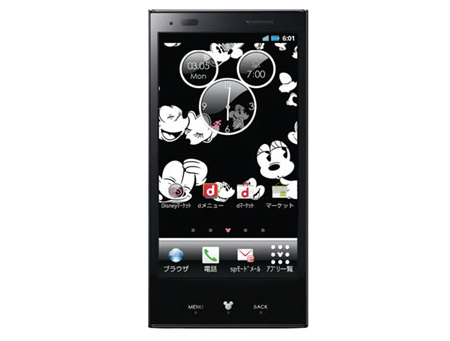 In comparison, the P-05D’s CPU has been marked at an OMAP4430 1GHz dual core processor and the primary snapper spells out to be an 8.2MP one. Another drop comes in the form of resolution wherein, the integrated 4.3-inch Organic EL QHD screen displays 540 x 960p visuals. The form factor is sleek at just 7.8mm and will come dipped in pure white and black hues. Additionally, each smartphone will provide access to Disney animations, applications and games as well as the Osaifu-Keitai mobile-wallet service, bringing in interesting features from both worlds.

The Disney Mobile on DoCoMo F-08D and P-05D price and availability details have not been precisely divulged. But the company has revealed that the former handset will be up for pre-order on February 17 at NTT DoCoMo stores. It can be expected to become available late this month, while the latter is expected to hit shelves in March 2012.