Digital Storm X17E goes for king of the hill title 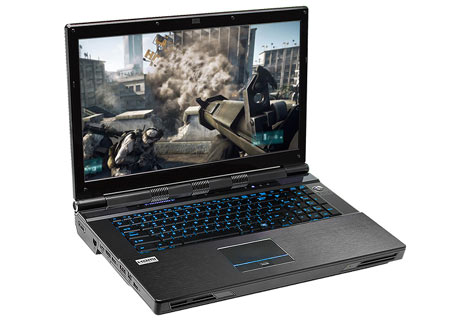 The Digital Storm X17E gaming laptop has been announced and is stamped with the rather unimaginative tag of the ‘world’s fastest.’ In that respect, it comes with a choice of either an Nvidia GTX 680M or an AMD Radeon 7970M GPU, claiming to deliver gaming experiences second to none.

The laptop’s 17-inch screen projects a resolution of 1920 x 1080 and makes sure detailed graphics are not lost on gamers. It comes with Intel’s latest i7-3920XM CPU, but the impressive part is that those who are technically inclined can actually overclock the device stably to 4.5 GHz. Digital Storm claims ‘unrivaled’ gaming can be experienced when this overclocking capability is combined with the next-generation GPUs.

Even though it’s pegged as a gaming laptop, it doesn’t lack in terms of other features and comes with USB 3.0 ports, a 9-in-1 card reader, a Blu-ray drive and support for up to 32GB of RAM. Its keyboard has different lighting zones with up to 7 color options to choose while customizing the look and feel of the gaming machine.

And in a price bracket less than $2000, it will be a direct competitor to the Razer Blade gaming laptop, although it doesn’t offer such things as Razer’s SwitchBlade UI. The X17E will also be available in a Signature Edition, which will receive distinctive branding, a custom paint job and special packaging.

In addition, the Digital Storm X17E price and release date details have been revealed. It is scheduled to be made available at the end of September with a price tag of $1753. The Signature Edition pricing will be revealed at a later date.