All those who have been pestering the guys over at Digg to design a dedicated application for their Android smartphones and tablets can now heave a huge sigh of relief. The app is now up for download through the Google Play store. Its developers have revealed through the official blog that the application has been launched after they were bombarded with requests for the same.

It goes without saying that the mobile utility for Google’s OS has been optimized for the relatively smaller touchscreens of tablets and smartphones. The app brings all the latest stories from the Digg homepage as well as from Digg Reader right to your fingertips. Subscribers have the option of switching between the web view and the parsed text view according to their preferences and they can easily swipe back and forth through feeds, folders and top stories. Just like in the web version, the articles can be shared with friends and colleagues via any sharable application on the phone including Twitter, Facebook, Google+, Tumblr, LinkedIn, Buffer, Dropbox, Google Drive, text messaging, email and much more. 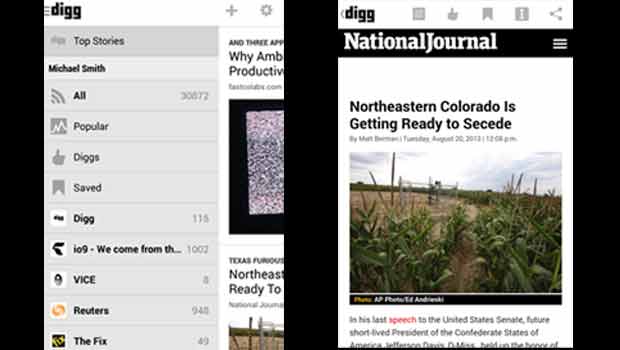 Saving stories or sending them to offline reading utilities like Pocket, Instapaper or Readability is also possible. Users can log into the service using their Google, Facebook or Twitter credentials and start sorting their items. Diggs can directly be sent to the Facebook timeline and subscribers can search for new feeds and add them from the mobile app itself. And if that’s not enough, creating, deleting or organizing folders is also possible via this tool.

The Digg for Android application is available for free and the developers are currently testing some more features which will be introduced through updates very soon.