Details of Call of Duty: World at War Released 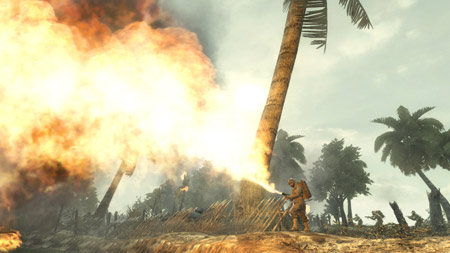 Activision and Treyarch has announced more details about its upcoming Call of Duty: World at War game. With the new game, players will be able to enjoy the game with new South Pacific and European theaters.

Besides, the game will also feature new enemy, new tactics and an uncensored experience of the climatic battles, claims Treyarch. The new US Marines and Russian soldiers will be equipped with new features like cooperative gameplay and new weapons including the flamethrower in the most chaotic and cinematically intense experience.

Call of Duty: World at War co-operative mode will allow four players to play online for Xbox 360, PS3 and PC, or two-player local split-screen on consoles. While the Wii version of the game will support co-operative mode for two players.

Moreover, the co-operative gameplay will allow players to rank up and will also open the doors of various perks in competitive multiplayer by completing challenges and earning experience points, adding continuous re-playability and team-based gameplay.

“With Call of Duty: World at War, we’re re-defining what it means to play a WWII game,” said Mark Lamia, Studio Head for Treyarch. “We’re excited to give players a host of new enemies that employ entirely new tactics, as well as new, groundbreaking tools – like co-op and the flamethrower – to succeed in the epic fight.”

Though the date of the Call of Duty: World at War has not been announced as of now, Activision and Treyarch intend to ship it by Fall 2008. The game is being developed for various platforms including Xbox 360, PlayStation 3, Nintendo Wii and PC.