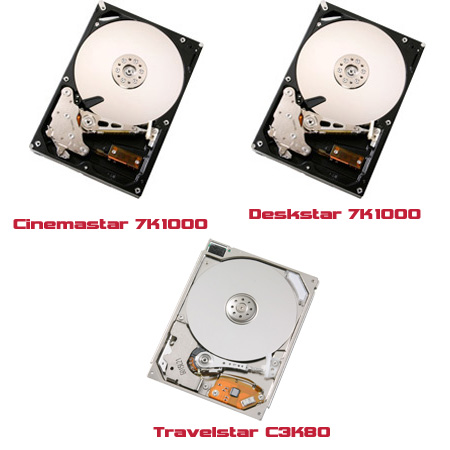 The Deskstar 7K1000 1TB is designed to cater to the requirements of customers who want to create, share, and store their digital information, while the Cinemastar 7K1000 1TB hard drive promises to offer optimized capabilities specifically designed for digital video recording (DVR) applications.

According to Hitachi, they have focused on maximizing the value of the hard drive by leading the era of the ‘smart’ hard drive that includes customized features tailored for the application-set served.

Hitachi’s 1TB products promise to deliver the performance and reliability required for the digital lifestyle. The 3.5-inch, 7200 RPM Parallel-ATA/Serial-ATA hard drives are built on perpendicular magnetic recording technology, which was first introduced by the company in Travelstar 2.5-inch and 1.8-inch product lines.

In addition to the above mentioned TB hard drives, Hitachi has also unveiled ‘Travelstar C3K80’ a new 1.8-inch hard drive with up to 80 gigabytes (GB) of storage capacity, with features suited to the needs of consumer handheld devices.

Like the two TB hard drives, Travelstar C3K80 is also based on perpendicular magnetic recording technology. With a 30-percent increase in storage capacity, a 20-percent decrease in power consumption and shock protection, the company claims to address three most important requirements for consumer electronics, including ample room for storing music, video, and other digital content, longer battery life, and unbeatable ruggedness with 600 Gs of operating shock tolerance.

According to the company, the combination of these makes the new 1.8-inch hard drive especially suited for applications such as video-based MP3 players, digital camcorders, portable media players, and handheld global positioning devices.

The leading low-power consumption of the Travelstar is due in large part to a reduction of the disk spin-speed from 4200 RPM to 3600 RPM, which is one of the key changes in the latest hard drive. The lower RPM allows longer usage time and enables 40-percent improvement in power-on-to-ready time over previous-generation 1.8-inch Hitachi products.

The Hitachi Travelstar C3K80 has a 128KB buffer and a media data transfer rate of 288Mbps, and is already available worldwide.