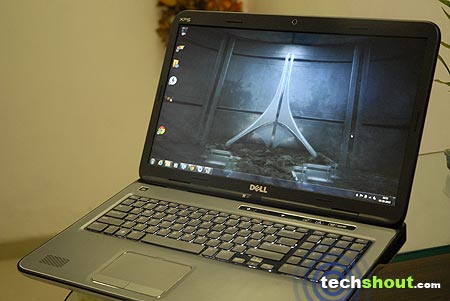 The Dell XPS 17 3D which we’re about to review is one of the high-end laptops from the Round Rock-based technology corporation that packs in a little extra something. Yes, you got that right; it’s 3D-enabled. Ultrabooks may be considered as the next generation of notebooks, but they still aren’t quite capable of taking on professional laptops out there. Consider the Vostro series or the Alienware range. Laptops of this sort go against their conventional nature of being portable, but they sure do pack in some serious hardware. And that’s what we’re expecting to find on the XPS 17, Dell’s foray into the world of 3D. 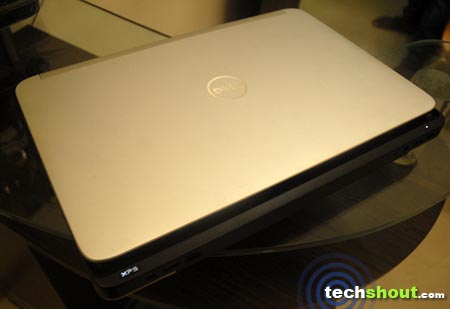 We’ve seen large laptops being churned out from Dell over the past years, but this one appears to be one gigantic beast. A thick baseline is hoisted up by none other than the battery pack which sticks out at the rear end. The bulge gives it an incline that proffers good viewing angles and even makes it easy to use the keyboard. The laptop on the whole, is crafted from aluminum with a bright shade of silver sprayed all over the display lid, while the inner compartment has a darker shade of the gleaming hue with a grayish tint. Similar to the Inspiron 15R, the Dell XPS 17 3D has a hinge-forward display. 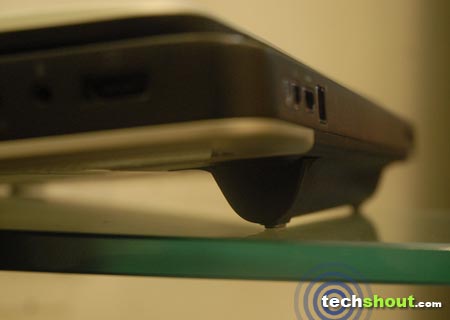 A weight of 3.53kg compared to a rounded out 3kg on the professional series Vostro 3750 notebook is what the laptop carries. On the right, you can find the Blu-ray optical drive followed by a 3.5mm headphone jack, a 3.5mm headphone cum digital S and PDIF connector as well as a microphone slot. Resting besides these components is an eSATA/USB port proffering the PowerShare attribute. On heading left, you’ll find nothing more than a USB 2.0 port and a 9-in-1 card reader. If you’re wondering where the other sockets are, they’re allocated to the rear end. This portrays a clean appearance eliminating the mess caused by wires popping out from the sides. A couple of USB 3.0 ports are accompanied by an AC adapter connector, a LAN port, an HDMI output and a mini DisplayPort. Dell has also thrown in a control strip located just above the full-sized backlit keyboard. 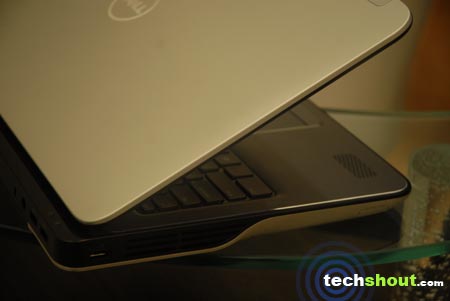 If you plan to lay hands on this 3D laptop, you will have to make a few sacrifices. No, we’re not talking about shelling out a lump sum of cash, which is inevitable, but the lack of certain features including the Intel Wireless Display technology that isn’t supported on the 3D option. The review unit sent over to us comes with a bunch of high-end hardware. Powering up the Dell XPS 17 3D notebook is none other than the second generation Intel Core series with the i7 2GHz 2630M processor in charge. Backing it up is the GeForce GT 555M discrete graphics from Nvidia. You can also choose between various i5 and i7 processors clocked up to a total of 2.80GHz. 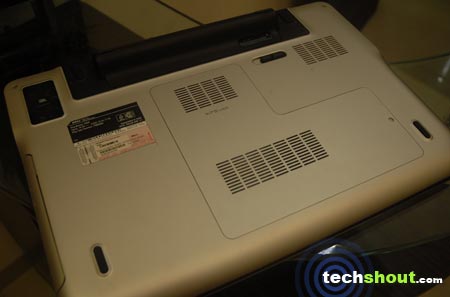 The device is configurable with up to a total of 16GB of RAM (we got stuck with the lowest option that’s 4GB) and choices of Windows 7 OS variants, namely the 64-bit Home Premium SP1, Professional SP1 or Ultimate SP1 edition. The optional Blu-ray Disc combo drive allows you to read Blu-ray discs and write files to CDs and DVDs. For hoarding needs, the laptop can be equipped with up to 1TB of storage or a 256GB SSD. Apart from the 17.3-inch 1080p full HD 3D display with a 2MP HD webcam and facial recognition, the notebook incorporates a JBL 2.1 speaker system and the Waves MaxxAudio 3 attribute. All these are fitted within dimensions of 16.3 x 1.3 to 1.5 x 11.3 inches. 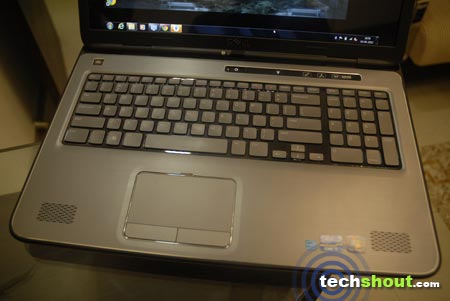 With a weigh of 3.53kgs, we doubt you’d be carrying this beast to a party. At the same time, its JBL-certified 2.1 speaker system backed by the Waves MaxxAudio 3 is sure to let you lay a few jams and fill the room up with high quality audio, the best we’ve heard from a laptop in a long time. 3D stereoscopic gaming in HD would indefinitely lead to the laptop feeding on the battery like its no one’s business. So we never did take power conservation into deep consideration, assuming that gamers would prefer having it plugged in at all times for the best experience. We gave a few games a quick whirl in 2D and 3D mode for a brief comparison on how the technology can affect in-game frame rates. Burnout Paradise started off at 60fps with all settings placed on high in 2D, and at approximately 24fps with the stereoscopic 3D effect switched on. Call of Duty Modern Warfare 2 tipped the scale at 120fps in plain visuals and dropped down to around 60fps in 3D. 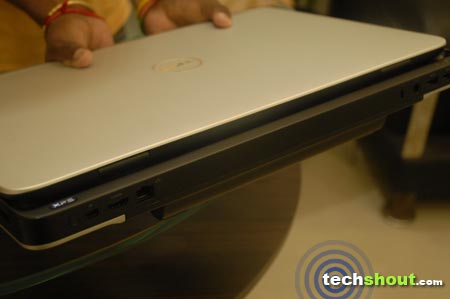 On the downside, our experience wasn’t all good with the Dell XPS 17 3D laptop. We did face a few annoying display-related issues. Firstly, the resolution tends to get messed up after the notebook resumes from sleep mode or exits games. Well, the latter matter could be due to low-resolution settings in some titles. And finally, viewing videos in stereoscopic 3D was a bit troublesome as the media player from Nvidia often lagged and even crashed. The Battery Eater software estimated around 1 hour and 5 minutes of activity time. Well, we were kicking around on high performance mode during this time. If you’re careful enough, the laptop is likely to top 2.5 to 3 hours on moderate usage. Dell’s estimate of 5 hours and 22 minutes on a single charge really gets us scratching our heads in confusion.

So what if the laptop isn’t high on portability? It makes a fine desktop replacement.

The XPS 17 delivers an immersive 3D gaming experience and it doesn’t apply much stress on the eyes if the depth of view is adjusted well.

From entertainment to professional needs, the notebook is capable of catering to it all.

Playing games or previewing videos in stereoscopic 3D is fun only for the first couple of hours. It’s a bit of a pain in the eye after that.

The brightness isn’t adjustable when stereoscopic 3D is enabled and the laptop doesn’t arrive bundled with the Nvidia 3D vision glasses either.

To sum it all up, the Dell XPS 17 3D makes one fine desktop replacement, but it’s not much of a laptop in terms of portability. For that, you can thank its extremely bulky design. All in all, the notebook can carry out almost anything you throw at it, from demanding games or applications to delivering enriched entertainment experiences. Along with a 9 out of 10 rating from our side, this high performance machine can be picked up in the US at a starting price of $1499.99, or at Rs. 86,400 for potential buyers in India.