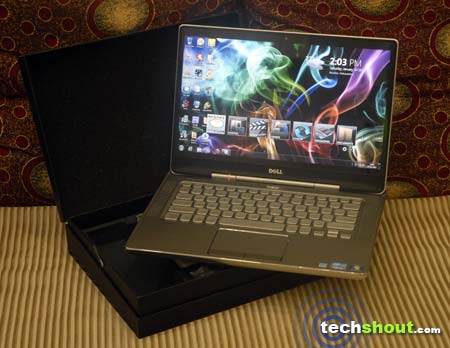 It’s been two months now since the Dell XPS 14z made its debut and we’re most certainly glad to have it over for a review. Similar to the Vostro series, this notebook range is also amongst the company’s professional-driven offerings. Compared to its predecessors, the new XPS series seems to have gone through some major R&D. And the hard work is clearly noticeable through the derived outcome, which is a well designed form factor that’s accompanied by various other aesthetics. Well, beauty isn’t everything and we’re hoping Dell has put on a good show on the performance and feature fronts as well. 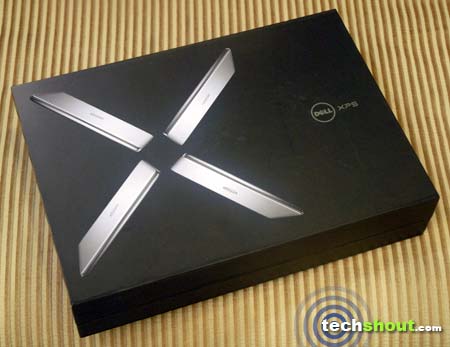 Advertising a professional laptop would surely mean a good offering of high-end components. And as far as the hardware listed on the specs sheet goes, the Dell XPS 14z does seem to be highly capable in this field. We received a combination of the Sandy Bridge-based dual core Intel Core i5 2450M processor operating at 2.5GHz along with the Intel Turbo Boost 2.0 technology that holds the capability of cranking up the frequencies to a maximum of 3.10GHz. To spice up this recipe, the company has also thrown in a 1GB Nvidia GeForce GT 520M GPU, 4GB of RAM, a 14-inch HD WLED True Life display with a resolution of 1366 x 768 pixels and a 500GB HDD, out of which 444GB of storage was available for our hoarding needs. 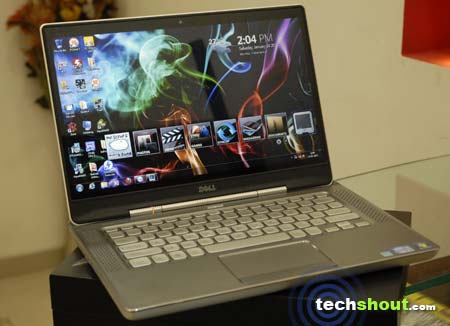 A 14-inch screen in a 13-inch form factor is how the Texas-based manufacturer describes its notebook. And no, they haven’t cramped the display into place. Instead, the bezel surrounding the screen has been neatly cut down to a minimum, allowing the display to conveniently slip into the smaller housing. It’s more like having a tablet docked onto a bright silver keyboard. The metallic shade does flaunt a professional look, but its sparkle over most of the device is a little more than what our eyes can take. We couldn’t help but notice that the Dell XPS 14z has a striking resemblance to the MacBook Pro. In fact, Dell seems to have mimicked most of Apple’s design for its professional offering. However, the outcome is surely a wonderful sight. The major highlight of this notebook is its extremely slim display that barely measures a few millimeters thick. And for some reason, the screen just didn’t mash up well with the bulkier lower body. Perhaps, a more balanced look sported by a few devices like the Acer Aspire S3 or Asus Zenbook UX31E notebooks which come within a similar price range, could have done well here. 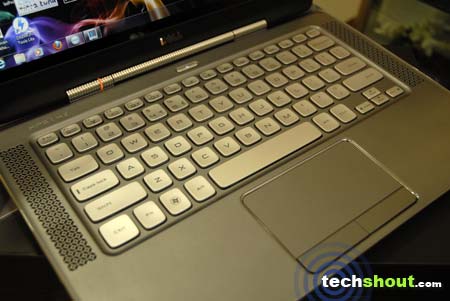 Moving on to the components, this Round Rock manufacturer has done a pretty good job with the placement of necessary ports. Since most of the main sockets are shifted to the rear, there shouldn’t be a mess of wires sprouting out from the corners. And, it even helps the Dell XPS 14z to flaunt a clean and tidy appearance. The input and output jacks comprise of a charging port, one for HDMI, a Mini DisplayPort, an Ethernet slot and 2 USB interfaces, one 2.0 whilst the second is powered by 3.0. Moving to its left, we ran into a 3.5mm headphone jack along with a mic port and a 7-in-1 memory card slot supporting MMC, SD, xD, MS, MS Pro, MS Duo and MS Pro Duo makes. With the lid left open, we spotted a 1.3MP HD webcam centered just above the screen. And on the laptop’s surface area lay a full-sized backlit keyboard that’s apparently spill resistant, although we decided not to push our luck with this feature in particular. There’s also a 100mm x 53mm multi-touchpad that supports gesture input and two stereo speakers located on both sides of the chiclet keyboard. Powering up this 23mm x 335mm x 234mm beast is a non-removable 8-cell Prismatic battery that’s integrated within the notebook’s chassis. 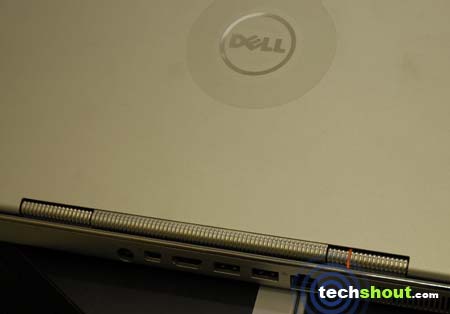 So the Dell XPS 14z has got the looks, but does it have the horsepower to fuel professional requirements? Well, that’s what we’re about to find out. We spent a few hours exploring each feature and in the process, also jotted down a few notes. Comfortable as it was, typing on the full-sized keyboard was fast too, courtesy of the well spread out keys. With the Intel Sandy Bridge processor employed within this machine, browsing through web pages, accessing applications and watching HD movies was a piece of cake. We did put it through a few tests. And based on the NovaBench software we used, the RAM topped at 10,818Mbps, followed by a 98fps recording in 3D rendering and a drive write speed of 105Mbps. For some reason, the discrete Nvidia GPU wasn’t detected and our tests are based on the integrated Intel HD graphics. 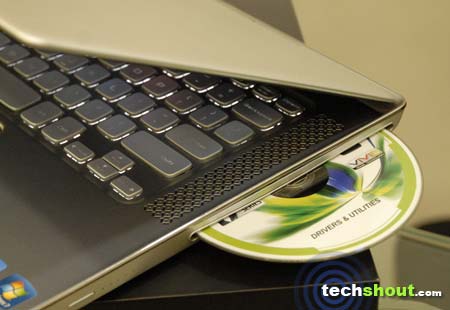 To go the extra mile, the Intel Turbo boost 2.0 cranks the CPU’s clock rate up a notch, whilst the Intel Rapid Storage technology enhances performance and consumes lesser power. Speaking of which, the Nvidia Optimus technology optimizes the battery life to deliver better visuals without the need of manually changing any settings. The Battery Eater tool provided an approximate reading of 1 hour and 10 minutes on the Dell optimized mode, whereas we managed to make it through not more than 3 hours whilst entertaining ourselves with the internet, YouTube videos, Quake 4 which ran at 60fps and a few music listening sessions. To top it all off, Dell has incorporated a pretty decent heat disposal system. However, we did come across some warm areas. There are a few more features worth mentioning as well. The Dell Stage software has quite a bit on its platter by offering the MusicStage, PhotoStage and VideoStage applications as well as the Stage remote for media access over networks. There are also the Dell DataSafe and Webcam Central in the list.

The 14-inch HD WLED True-Life display is rather brilliant and watching movies or flipping through images was quite entertaining.

What really grabbed onto our goodwill was the unique placement of sockets.

The backlit keyboard is ideal for working in dark or low light areas.

During the hours we put into reviewing the Dell XPS 14z, not once did we hear a peep out of the internal hardware.

The lower resting area of the notebook heats up a bit after a few hours.

2 USB ports are somewhat insufficient, especially from a professional point of view.

A full HD display would have further enriched our entire experience. And owing to its slim support frame, the screen tends to wobble a bit when moved around.

Whilst on the go, a backup partition would prove to be convenient when it comes to recovering from system crashes.

The Dell XPS 14z laptop certainly has ‘professionalism’ written all over it. And if you really do need a tool to ‘power through your day, and look good doing it,’ we’d actually recommend this notebook, but only to a certain extent. According to the company’s product page, the U.S. offering includes 4 options that start from $899.99, whilst the Dell India page sports 2 configurations which are available at an initial price of Rs. 61,900 onwards. Taking into account the performance aspect and the features offered along with the craftsmanship this laptop flaunts, we’re giving it an 8.2 out of 10 rating.