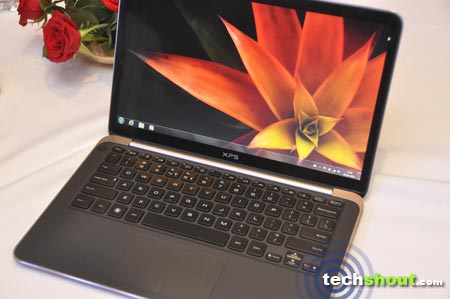 We’re obviously more than eager to review the Dell XPS 13 Ultrabook, the Texas-based technology corporation’s first notebook that fits within the specifications laid down by Intel for taking on this particular branding. The guys over at Round Rock, Texas, seem to have put in a lot of thought before crafting this piece of machinery. And they’ve taken their own sweet time over it too. We’re not saying that’s a bad thing and it could even turn to the company’s advantage, knowing what competition they’re up against. Some might say time is of the essence when it comes to launching devices of this sort. However, it’s all about what Dell puts out in the end. 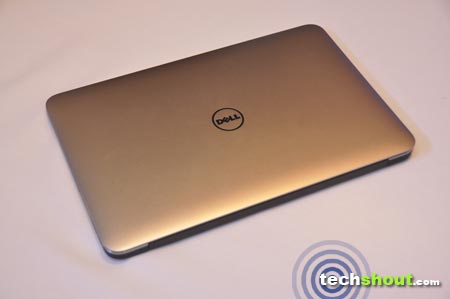 We’ve barely started our review on the Dell XPS 13 Ultrabook and we’re already falling in love with it. Well, that must surely be due to its sumptuous design. We’re going out on a limb here saying that we might even like it better than the MacBook Air, appearance-wise. The packaging is pretty much standard for most XPS laptops, a neat black-coated box which tends to depict that there’s something to drool over inside. Besides the Dell branding centered on the notebook’s lid, the upper surface is crafted from machined aluminum with a gleaming shade of silver. Surrounding the keyboard is a magnesium palmrest sprayed with soft touch paint, while the lower surface flaunts a carbon fiber composite base which has a rubberized feel to it and a textured design.

Based on looks, the XPS 13 appears to be a slimmed down version of the Dell XPS 14z. It flaunts somewhat of a similar design as the latter device. On the bright side, it comes without the jazzy elements. With the bezel surrounding the display cut down to a minimum, you’d actually think the laptop is one of those keyboard folio cases with a relatively large tablet docked onto it. Measuring 18mm at its thickest point, we ran into a USB 3.0 port and a DisplayPort on the right, while the left side houses nothing more than a USB 2.0 socket, a 3.5mm headset jack and an AC power input. Also incorporated within the dimensions of 6mm to 18mm x 316mm x 205mm is a full size, backlit chiclet keyboard, a Waves MaxxAudio 4 sound system and a spill-resistant glass touchpad with gesture support. 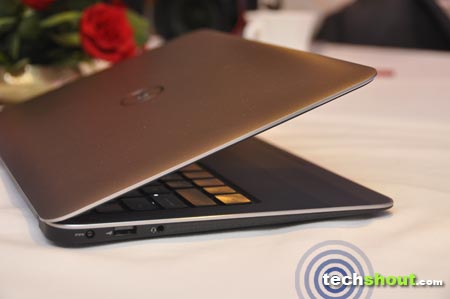 The Dell XPS 13 Ultrabook might have already captured our hearts, but not our minds. And although the design may play an important role in creating a successful device, it certainly isn’t the only deciding factor. This notebook needs to perform as well as it looks. So what’s the company offering? The laptop is customizable with second generation Intel Core processors. The options aren’t much, but they’re likely to be quite the performers. Our review unit is embedded with an i5 2467M CPU that operates at a frequency of 1.60GHz, along with Turbo Boost 2.0 for cranking the clock speeds up to a maximum of 2.30GHz. A 1.70GHz Core i7 2637M variant is also amongst the options. And for graphics rendering, we get none other than the Intel HD 3000 family.

Backing the Sandy Bridge-based ULV processor is 4GB of dual channel DDR3 RAM operating at 1,333MHz. Resting under the lid is a 13.3-inch HD True Life WLED display proffering resolutions of 1366 x 768 pixels and a protective coating of Corning Gorilla Glass. The Waves MaxxAudio 4 takes care of delivering quality sound output, while a 256GB SSD caters to hoarding needs. A 128GB SSD is what our unit packs in. Then there are the usual frills like the Intel Centrino Advanced-N 6230 802.11 a/g/n Wi-Fi adapter, the Smart Connect technology, Bluetooth 3.0 and the Wi-Di attribute fitted onto the Intel QS67 chipset. Dell states that its Ultrabook can deliver up to 8 hours and 53 minutes of activity life through the built-in 47WHr 6-cell Li-Polymer battery. Well, these readings usually tend to differ based on usage. A weight of 1.36kgs is what the notebook carries after incorporating all the aforementioned components. 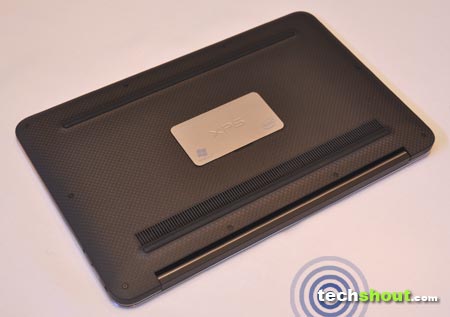 The Ultrabook sent over to us is apparently a pre-release version and it might have a couple of bugs here and there. Besides a few missing drivers which makes the touchpad lose its gesture support and go haywire every now and then, everything seems pretty much stable to us. It doesn’t take the notebook long to heat up. The ventilation area is completely acceptable, but the same doesn’t apply to the entire keyboard which goes up by a few uncomfortable degrees. HDMI may have been widely adopted by many consumer-electronics manufacturers. However, the mini DisplayPort has the upper hand since it’s backward compatible with analog-VGA, DVI and the former interface as well.

As we’ve already mentioned, the 13.3-inch screen is really impressive. We’re not talking just about design, but clarity-wise as well. Previewing 720p HD content is an enjoyable experience and the sound system is crisp and clear, eliminating the need for you to carry along external speakers. The keyboard on the other hand, isn’t all that comfortable for typing. We’re going ahead and blaming that on the heat. Where performance is concerned, the Dell XPS 13 Ultrabook starts up in less than 20 seconds, an average of 15 to 19 seconds based on multiple records. It scores a total of 3353 marks on the PCMark 7 benchmark tool, while the Battery Eater Pro software estimates around 2 hours and 45 minutes of activity life, although we do derive a little over 3 and a half hours of continuous video playback. You can expect an additional hour if you’re carrying out basic tasks on power saver mode or maybe without Wi-Fi turned on. Dell’s claim of 8 hours and 53 minutes seems to be way off track. 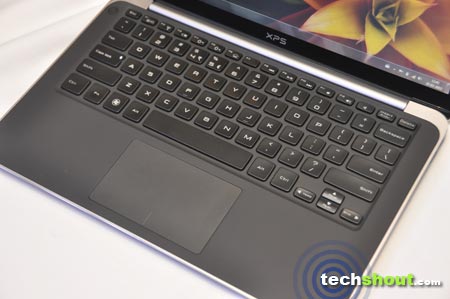 The XPS 13 is well crafted and it’s certainly the kind you’d want to carry about.

The sturdy premium finish is complemented by a beautiful bezel-free display.

The mini DisplayPort is a noteworthy addition over HDMI as it incorporates more capabilities and backward compatibility with VGA, DVI and HDMI interfaces through appropriate adapter dongles.

We aren’t quite satisfied with the heat disposal system. The notebook warms up on its resting surface as well as around the keyboard in a matter a minutes.

The battery life isn’t up to the mark and it’s way below Dell’s specified timeframe.

So would we change the Dell XPS 13 Ultrabook in any way? We’d surely want it to dispose off heat more efficiently and preferably not through the lower surface. It’s a well crafted notebook that’s high on portability, fitted with decent hardware components and has the looks to kill for. We’re giving it an 8.7 out of 10 rating. The question now arises – How much would you have to spend for this piece of machinery? You’re looking at a little under $1,000 for potential users in the US or Rs. 79,900 for buyers in India. These rates apply to the basic model only.