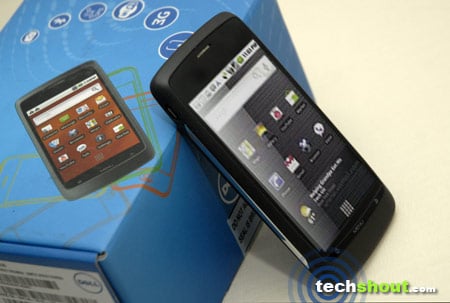 What does the Dell XCD35 smartphone stand out for that convinced us enough to review it even if it’s close to a year since it was originally launched in India? There are a plethora of things actually – right from affordability to ease of usability and dapper looks. And there’s no need to mull over the phone bearing a striking resemblance to the low-cost Android smartphones too, flip it over and you should be able to spot it in the crowd. As for the package Dell sent over, the phone trotted in our environs complete with a stereo headset, charger, microUSB cable, 2GB microSD card, user guide and warranty card. Yes, almost everything you’re going to need to get started is right in place.

Admittedly, our first impression of the Android 2.2 powered XCD35 handset isn’t worth dropping a line about. We just remember staring at it longingly and wondering if the chassis would magically change into something more inviting. We gradually took to liking the all grey matte finishing though which gives the Dell XCD35 a very comfortable feel and is easy on the eyes, even if not necessarily attractive at first glance. Three touch sense buttons for Home, Menu and Back sit right below the display while the rear side has just the Dell logo and the 3.2MP camera lens. Over to the metallic stripped edges and you’ll notice the speaker lined on the right with the volume rocker button just above it. The left border includes the USB port while the top of the phone features a power button and 3.5mm headphone jack. 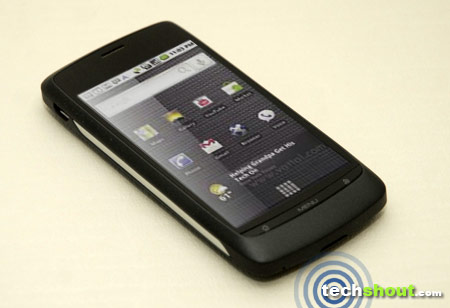 The Dell XCD35 handset is very well-constructed for long usage, particularly its backside. It has distinct lines, sort of like a backbone structure that evidently stands out in the rear area of the phone. The handset is a mere 120g in weight and easy to hold, suiting self-confessed mobile phone addicts with its appreciable size of 114mm x 56mm x 12.2mm. The Dell XCD35 took quite some time to power up and had the customary ‘droid’ take us through various settings. The 3.5″ TFT LCD capacitive full touch display lights up instantly and we’re told it coughs up a maximum resolution of 800 x 480 pixels. Just like the looks of this device, it takes time to get accustomed to the slighting bumpy touch experience on offer. Dell almost certainly hasn’t included one of the silkiest screens around and there’s this slightly rough feeling your fingers are endured to as you move them over the display.

Ironically, as you use the XCD35 for a longer period, you’ll find the multi-touch gesture supporting screen is mighty responsive even if not very smooth. The lag is quite evident when you indulge in touch-intensive applications and games like in Fruit Ninja. Even as the slashed fruits made the screen look yummy, it didn’t excite us enough to ignore the clearly out of sync touch. On the brighter side, there are five customizable homescreens which can be loaded with shortcuts, widgets and folders. In wallpapers, the background can be set up from a Gallery image, Static Wallpapers and Live Wallpapers. Avoid stepping on the Live Wallpaper terrain even if it sounds really cool to save up on battery juice. 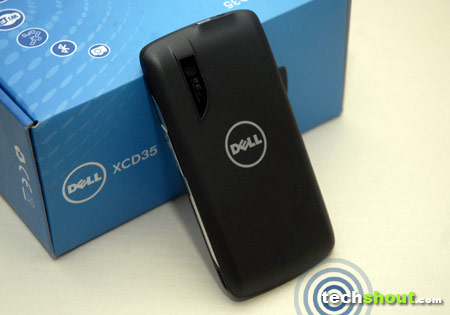 Like most full touch Android phones, the QWERTY keyboard on the Dell XCD35 struggles for space in the portrait mode. It will have you keying in wrong letters with so much enthusiasm, that at one point you may just want to applaud it for its inaccuracy. Large handed users can give this weak area of the phone a miss completely. Thankfully, the story is much different with the phone held in the landscape mode – heavy texters won’t be disappointed. The responsiveness of the keys became that much more meaningful as we ended up hitting the right keys on more occasions than one. The familiar threaded messaging experience has nothing different to offer though in the compose mode, the virtual keypad has a mouthful of handy options. We liked the dictionary and the close to perfect predictive text indicator.

It was the incorporated 3.2MP AF camera rounded off with a 5x zoom that we tackled next. The included snapper is a winner in terms of both, the interface and image quality. Besides being able to capture images in decent quality, it offers shortcuts to functions like zoom, white balance, location saving option and Focus Mode with exposure right on the screen (no searching required) in the camera mode. Color effect, video quality and white balance are what you get to select from in the camcorder mode. A sliding bar along the right of the screen allows adjustment of the brightness on the fly. When capturing moments, the onscreen camera button doesn’t need more than a nudge to go click – click. Right above it is a switch to alternate between image and video modes and the gallery shortcut. While we can’t call picture and video quality top-notch, it was definitely better than most other competitive Android phones in this price bracket. 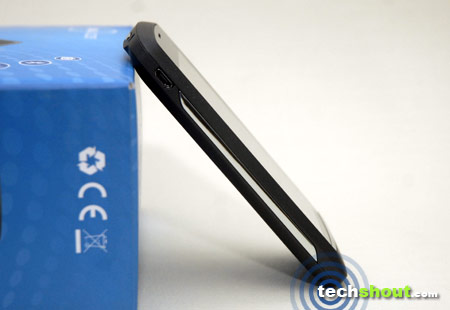 As much as we had the camera compelling us to nod our heads in agreement to what it had to offer, it’s by far our web experience on the Dell XCD35 that left us hugely impressed. Users always on the move are going to appreciate the snappy web page loading as also the multi-finger gesture support. Being able to view various websites in different windows makes switching between them a breeze while activities like searching within a website or even bookmarking a page are all at beck and call. Don’t like zooming in and out of a page ever so often? Fret not, simply double tap and the web page fits to screen beautifully. The ARM11 processor running at 600MHz sure does a commendable job at having content up and running on the phone in a jiffy. In fact, the XCD35 can easily claim to be one of the few low-cost Android phones to deliver such a spiffy internet experience. The Wi-Fi plus GPS enabled phone also includes Bluetooth 2.1 with EDR and works comfortably on 3G (HSDPA 7.2Mbps) networks along with coughing up GPRS/EDGE/HSDPA support. It also lends a helping hand to the GSM 900 / 1800 / 1900MHz, UMTS 900 / 2100MHz networks.

On the entertainment front, the phone includes music and video players which are nothing but basic in functionality and should cater to on-the-go multimedia needs. The microSD card slot can accommodate a maximum storage of 16GB. Its applications galore for the Dell XCD35 both in terms of being preloaded and offering access to the Android Market. The likes of DocumentsToGo, Calendar, FMRadio, Calendar, Gmail, Google Search, Latitude, Maps and YouTube among others are bundled in. Dell’s own U-Connect should put a smile on social networking fans with its seamless integration of Facebook, Twitter and Yahoo. The Task Manager application comes truly handy when there are more than a handful of applications running in the background. Kill them, switch between them or just know about CPU usage, there’s a lot to look forward to. We found the Voice Search function to be spot on most of the times. 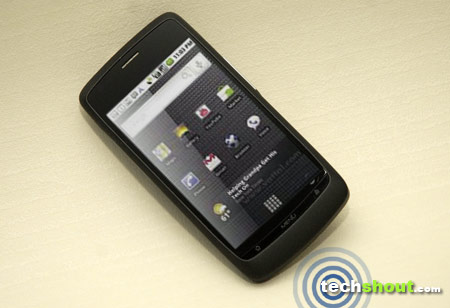 Both images and videos play up well with the screen being pretty good for the said resolution.

A wide feature list in the below 15k price range says Dell has worked at making the XCD35 a value for money phone.

The internet experience on this handset is one of the best we’ve had in an affordable Android phone.

Despite its gorgeousness, the screen is quite open about its admiration for fingerprints and smudges.

The battery life of this Dell handset is a bummer and we had to juice it up at least twice a day on average usage.

So the speaker’s been placed quite aptly, but does it help to improve sound quality? Not one bit!

At a price of Rs. 10, 990 the Dell XCD35 is a great option for mobile enthusiasts wanting to start their journey with Android. Almost everything novice users (particularly those wanting a good web surfing device) would need is in place with this phone, leaving no room for complaints about being a basic Android handset. Yes, it didn’t leave us in awe about anything in particular, but really how many phones in the price bracket the phone is offered can claim to have so much goodness on offer? We’re giving the phone a good 8 out of 10.