It looks like Dell is working on a new convertible device for business customers and it plans to launch it under the Venue 10 moniker. The upcoming release will run on Android and offer a tablet-cum-laptop experience through a hybrid form factor.

The device will work much like the new €1000 Windows powered Venue 11 Pro, but will cost just a fraction of the price. Liliputing is reporting that the Dell Venue 10’s keyboard dock has passed through the FCC where sketches of its and the tablet’s design have been revealed. The pictures show that the slate will have a circular edge much like the Yoga tablets from Lenovo.

The speakers and battery will most likely find a home in this portion of the device. As you can see above (actual photo of the accessory is embedded below), the keyboard dock has been designed to accommodate the slate’s bulky bottom and it offers a trackpad along with a strip of dedicated function keys such as search, all apps, action menu, back and home amongst others.

Additionally, it connects to the tablet via Bluetooth which means that it can be paired with other compatible devices. Dell has also gone the distance by adding backlit keys which is something you don’t easily find on low-cost notebooks. The FCC hasn’t revealed anything on the hardware, but we have a good idea of what the slate will offer thanks to a benchmark listing. 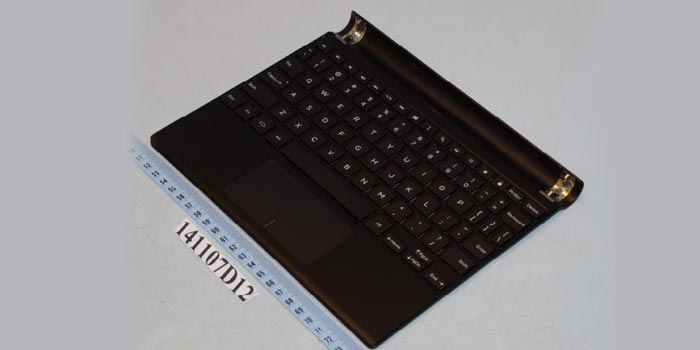 The Dell Venue 10 will most likely make its debut at the CES or MWC expos next year.