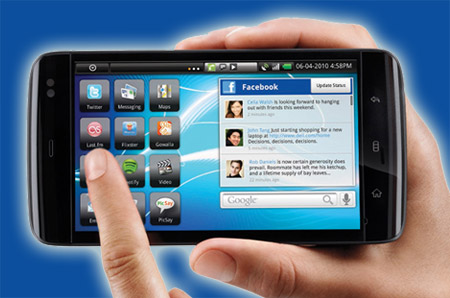 There are plenty of reasons as to why we’ve waited so long to review the Dell Streak. A high resolution tablet, a smartphone, an iPad competitor, a good blend of all of it in one – just what is it intended at? We’ve scribbled down a fresh look of all that and more in this review. The tablet war is getting thicker by the day and every manufacturer appears to have one of theirs worth flaunting. But if there was anything that bugged mobile world more than Apple’s will they or won’t they scenario with the iPad launch, it’s got to be Dell’s Streak tablet. It’s been just a couple of months since the Streak marked its presence in India and the fact that it was Android 1.6 enabled wasn’t well received then. Dell took it in their stride and were rather upfront with an Android 2.2 update for this exciting device soon enough.

What we had in the box with the Dell Streak was a charger cum USB cord, earphones with two replaceable earplugs, a 16GB card, warranty support and a soft velvety cover. Sorry Dell, but our very first impression of the device came across as a very large iPhone with a slight refitting of form. The front face exhibits the large 5” and much talked about scratch-resistant Gorilla display. There are capacitive touch buttons in the bottommost area assigned to Return, Menu and Home functions. Next to this area on the extreme left edge is the microphone. Moving to the upper right corner on the fore is a front facing VGA camera. The power adapter port is all that’s housed on the left rim of the tablet while its right side is outlined by a 3.5mm port and buttons for volume control, power on/off and camera. Barring the screen area, the tablet follows a decent matte black finishing.

On the backside, it has been fitted with a 5MP camera lens. The battery cover baring the Dell logo partially occupies the speaker grill in the lower area of the tablet. It doesn’t seem sturdy enough though and feels quite tinny and supple in comparison to the overall build quality of the phone. Lucid though is how Dell stays on the design front with this device. Our only grouse is that it’s an open invitation to smudges, fingerprints and anything else that can make it look grisly. Like all things Android, upon startup, the tablet gave us the option of setting up our Google account before we actually got down to using the device. The Dell Streak quite surprised us with the long time it took to power up. A free tutorial of Swype and setting up our Google account was what got us started with our true tablet journey. The massive screen real estate we realized soon enough just made everything look so much better. The phone allows a total of 6 homescreens to be customized as per your fancy while the main menu spans over two pages. The phone’s lock/unlock slider shares a phone sound on/off function.

Its familiar Android territory and the call, menu pull up and browser buttons appear in the lower area. A pull down menu for notifications sits in the upper left area of the screen. Unlike other Android phones, the device manages to work perfectly fine even with Live Wallpapers. The touch we grasped was very responsive and gave a great haptic feedback. In Contacts, long pressing a contact threw additional options like view, call, message etc. With the very immersive Swype tutorial we received at the onset, there’s nothing that could stop our text-friendly fingers from ‘swyping’ their way. It is a text messaging lover’s delight and showed us what accuracy was all about. The keys in the upper row somehow registered finger swirls a tad bit better than the other keys. Google’s own Android keyboard too was not far behind, providing a tactile and responsive typing journey. Add frequently used words in the user dictionary, choose from a wide number of language options or employ text-to-speech, the choices are expansive. 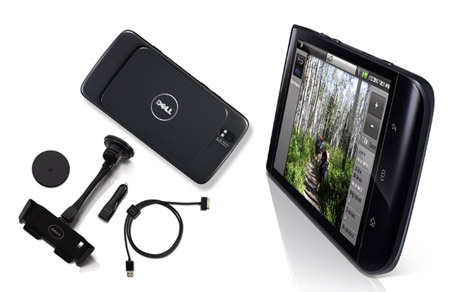 The general incoming and outgoing call quality is just about passable and it did seem like Dell has added voice functionality to simply appease smartphone enthusiasts. It could also be the placement of the microphone in the lower region that kept the outgoing voice quality in particular noisy. When we got down to syncing the Dell Streak handset, we could almost dismiss the last thwarted conversation we engaged in from our minds withal. Among the various Wireless Settings included, the Portable Wi-Fi hotspot had us enthused and we could browse the web through our Nokia E63 phone by defining the Streak as an access point. With such a wide screen and a good one at that, the phone’s own internet browsing is engaging. It’s almost as if the Qualcomm Snapdragon 1GHz processor is in love with the web and has pages load even before you can say whiz! The intuitive screen makes the freighted pages look oh-so good. The interface too is all in for double tap and pinch to zoom when surfing through with the list on how you can customize your web navigation experience being all-embracing. What also kept us hooked was the fact that we could go from multiple browser windows minus any straggle.

The Dell Streak sports a 5MP autofocus camera featuring 4x zoom that delivers up to the snuff captured content. The self-explanatory interface has a thick bar on the extreme right with a shortcut to album gallery, option to switch between image and video modes and a committed click button. From setting the brightness and contrast to choosing the store location or tuning the white balance and flash, you aren’t left in the lurch with satiating those photographic taste buds. A choice of Custom, You Tube (high 10m), MMS (low, Max, 30s), Low (30m) and High (30m) video modes are proffered. We instantly loved the two ways in which the arrested content is stored – as a pile (needs a simple flick of the finger to open images) and according to the date range. If there was anything that left us quite unsettled on this tablet, it’s got to be the audio quality. The run of the mill sound will have you put aside your dreams of resting this stunner on a cradle for loudspeaker mode. The included earphones though, are a saving grace.

Don’t assume transfer of content to and fro the phone and the PC to be simple plug and play. A far cry from that, you’re required to painfully sync it to the PC. The Dell PC Suite even after installation is not of much help. The company does make it seamless on the application front though. The Manage applications attribute is divvied up with separate columns for downloaded, running and only SD card apps. While the Android Marketplace can be reached at quickly, there are also pre-loaded applications like the Amazon Kindle app, dedicated Twitter, Facebook and YouTube applications and CoPilot Live along with TuneIn Radio. With so much in here already, there’s no reason why Google would leave out on Google Maps and Latitude for directions. For a tablet that’s designed to behave like a phone too, the delivered battery life is way to meager. It was hardly a day and the Streak’s battery sapped out.

Though the tablet does feel a little too meaty for a smartphone, using the device is pure tech pleasure.

The screen is goodness personified and visually appealing.

We would have appreciated if the very dust friendly Streak included a standard charging port.

The screen takes long to switch between landscape and portrait modes.

We couldn’t make up our minds if we disliked the audio quality more or the fact that the tablet coughed up belittled battery power.

It could bother your senses that you’d want to make do with such a large smartphone. But getting down to it, the Dell Streak could make for perfect company considering there’s nothing missed out on. Save for the one or two odd times the screen froze and the poor battery life, we didn’t find anything worth complaining about this device. The hot voice-enabled slate carries a price tag of Rs. 34,990 nevertheless which may seem a little too much considering its diminutive packaging. Our rating meter for the device reads a good 9.5 out of 10 though.