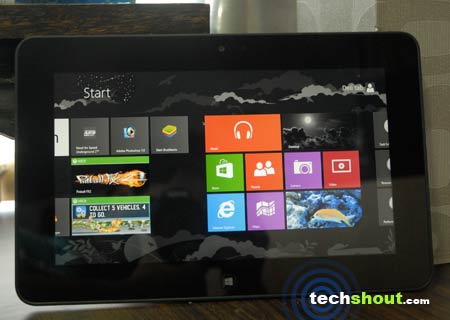 Today, we’re reviewing the Dell Latitude 10, a business tablet which runs on the Windows 8 platform backed by Intel’s latest generation Atom processor. What we have here is also one of the first Clover Trail powered slates that have made it to the market following Microsoft’s latest OS launch back in October. Unlike slabs which come with the newest Core series CPUs, the processor utilized for this device segment is not only energy efficient, but also low in cost bringing down the overall price to a more competitive level where popular gadgets running on Android and iOS are currently selling, including those with Windows RT. 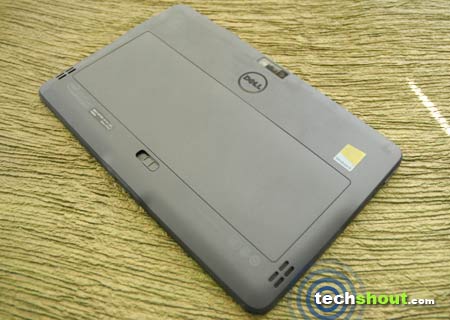 Unlike most tablets in the market, there’s one specific component that makes Windows-based ones stand out in a crowd. If you haven’t guessed, a majority of slates with the latest MS OS come with a dedicated Start button featuring the Windows logo on it, much like Apple gadgets with the unique home button. The way the front is crafted is pretty much similar to the upper portion of the XPS 14 Ultrabook. The screen and the 2MP HD webcam are covered with edge-to-edge Corning Gorilla Glass which has a slight bezel running alongside the edges. The sides play house to various ports and components such as a full size USB 2.0 socket and an HDMI jack on the right, the volume controls on the left and the SD card slot as well as the sleep/power button and rotation control key on the top.

Flipping the Latitude 10 over reveals, in order of placement, an 8MP camera with an LED flash encased within a separate compartment, the Dell logo and a swappable battery. On the back, you’ll also find dual stereo speakers, one on each side, just below the battery. The same magnesium finish is sprayed over the entire rear surface as well, giving it a soft-touch feel, a comfortable as well as good grip and a smooth scratch-repellent finish. On the portability front, the slate measures 274mm x 176.6mm x 10.5mm in dimensions and weighs 658 grams or 820 grams based on the battery option selected. The tablet may not be the slimmest in its category or even amongst the leanest, but it’s convenient to carry around and use almost anywhere. 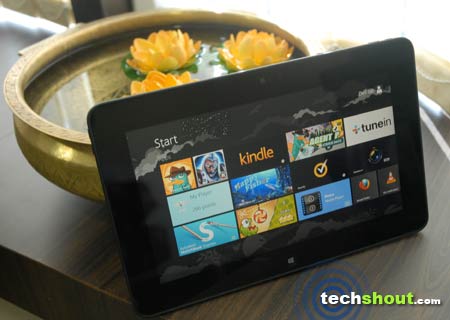 Now, when the Round Rock giant says its tablet is for business professionals, they in no way mean you’d be able to throw in demanding tools and expect them to work without any repercussions. What the company aims through this release is to provide users with an intuitive mobile device that doesn’t fall short on performance and can, at the same time, deliver enhanced battery life. Before we begin listing out the technical components, you ought to know that the slate comes in 3 configurations. There are the essentials edition, the standard release and the yet to be announced, enhanced version. The one we’re reviewing is the second option listed out. So here’s basically what the Dell Latitude 10 packs in:

In addition to the aforementioned specifications, Dell is also offering a fingerprint and a smart card reader in the enhanced bundle as well as a docking station that tags along an HDMI port, and 4 USB 2.0 sockets through which a keyboard, mouse, printer, MP3 player or any other gadget can be connected for a more desktop-like appearance. There’s also a Gigabit Ethernet socket in tow. 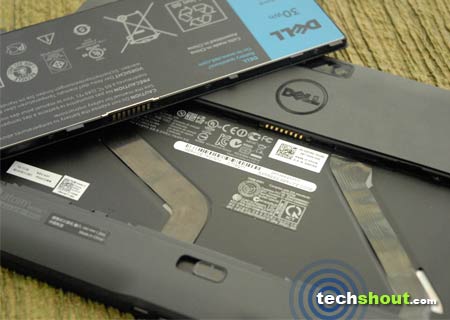 Windows 8 on a tablet:

Intuitive interaction in every aspect is what Microsoft has delivered through its latest platform. Live Tiles do exactly what the name suggests – Liven up the interface. The stock backgrounds plus color tones make the appearance all the more likable. The fact that you can run 2 Windows 8 (Read Metro) applications simultaneously (not all though) is quite appealing. And switching between open apps as well as closing them is seamless as these tasks only require simple gesture swipes.

Overall, the UI is pretty sleek and the time we spent reviewing the Latitude 10, not once did it slow down or hang up on us. What disappointed us most is the lack of add-on features the new style applications miss out on. For instance, the Music player falls short of basic attributes as well as options and so does the default Camera app where the flash cannot be controlled, the focus can be manually set and so on. What the latter does allow you to do is adjust the brightness, contrast and exposure as well as set the resolution and turn on the timer, while capturing an image or video can be done by simply tapping anywhere on the display. 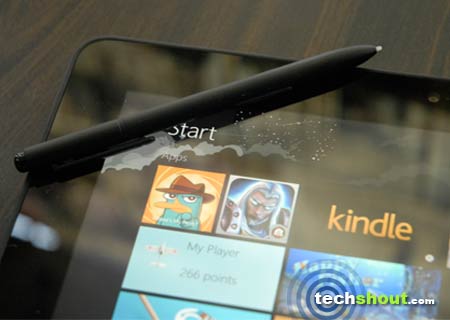 The desktop environment, on the other hand, isn’t quite as enjoyable on a tablet. Apart from being disconnected from the modern UI, carrying out the usual operations like right-click, scrolling through web pages and navigating through Explorer tend to get a bit tedious without the presence of a keyboard and mouse. On the bright side, Microsoft has done what they could to make it more touch friendly. Here’s a funny thing – if you were to install any third party browser and set it as default, the Windows 8 version of IE 10 will disappear from the Start screen and will be inaccessible until the changes are reverted. 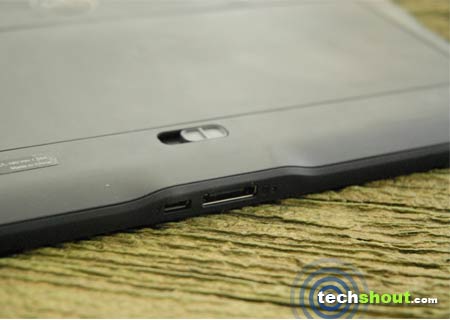 What’s the Atom capable of?

The Dell Latitude 10 does run a full-fledged version of the Windows 8 platform. However, expecting it to deliver a modern desktop experience that has the ability to run demanding applications and tools, is far out of the slate’s reach. As the company informed us, the tablet is basically for business users on the move, not the kind of professionals that have high computing needs. The Atom Z2760 SOC which has a 1.8GHz clock speed, 2GB of RAM and PowerVR SGX545 graphics, is the tablet’s driving force and is a very power efficient piece of silicon.

The Latitude 10 takes just about the same time as a normal Ultrabook would to start up and shut down. And the battery life is just what the doctor ordered – We managed to obtain approximately 8 hours of activity with the 2-cell 30Whr pack and the company is also offering a 60Whr 4-cell one for higher requirements. The aforesaid estimate consists of normal usage which includes browsing the web, playing Windows 8 games, watching videos and listening to music, with Wi-Fi turned on and active the entire time. We did run the device through a benchmark test. On PCMark7 basic edition, it scored 1434 PCMarks, which is almost half the points the XPS 13 Ultrabook achieved with a second generation Core i5 processor. 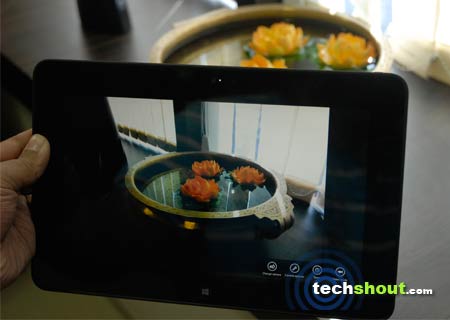 As we’ve already mentioned, the Dell Latitude 10 has a 10.1-inch IPS LED which proffers 1366 x 768p resolution images. Clarity-wise, visuals are beautiful, but the slate is at times incapable of smoothly playing back certain HD videos in the ‘Metro’ app and WMP 11. Well, the desktop version of VLC did a marvelous job in filling up those gaps. To wrap things up, we’re going to tell you that Dell has integrated a pretty good 8MP camera on the rear and with a decent companion application, it will be able to render quality images and videos. 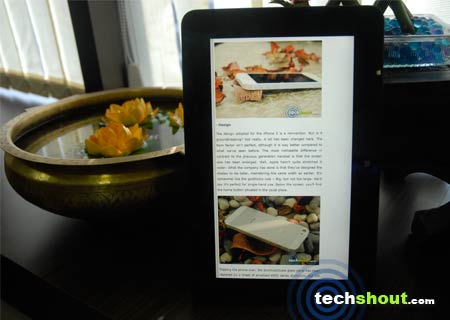 The Windows 8 interface doesn’t show any sign of struggle when it comes to scrolling or transitioning between applications.

As always, Dell has put together a remarkable device by including added features that most other competitors tend to scratch off.

While the battery life in nothing more than sufficient for over a day’s worth of normal usage, its swappable support is just the icing on the cake.

If you get the optional Productivity Dock, you’ll be able to convert the slate into a full-fledged PC with support for a keyboard, a mouse, an external display, a printer and various other peripherals.

Lags in the Desktop environment are quite frequent. And apps running here will freeze up when the screen is turned off (doesn’t apply for Windows 8 applications).

The removable battery failed a couple of times where, for instance, the tablet did not detect one attached or the slate randomly went off with no sign of it shutting down. A loose fitting is probably what caused the issue.

The optional stylus isn’t as responsive as you’d expect it to be and a single USB port doesn’t suffice when on the move, at least not for us.

We’ve pretty much said everything we needed to about the Dell Latitude 10. And to sum it all up, the slate does a fine job of delivering the mobility of a tablet and PC-like productivity under a single roof. Now only if Microsoft could sprinkle a little (actually much) glitter over its pre-loaded Windows 8 applications, the device would make an ideal companion. For potential buyers in the US, Dell is offering this slab for a starting cost of $499.99, while Indian customers can pick it up for Rs. 35,990 and above. Before we wind up here, we’re leaving this piece of hardware with an 8.5 out of 10 rating.