The highly anticipated Dell Venue 10 and Venue 10 Pro tablets have been officially revealed and the Round Rock company has also unveiled a new laptop called the Chromebook 11. The former slate is the first in the lineup to run on Android 5.0 Lollipop, while the latter is powered by Windows 8.1. And along with the notebook, they’re designed specifically for students.

Despite being a tablet, the Dell Venue 10 and Venue 10 Pro also act as a 2-in-1 convertible as they can conveniently be transformed into a notebook-like design by employing a dedicated keyboard dock. Additionally, they can be deployed in multiple modes, including clamshell and tent, owing to the dock’s reversible form factor. 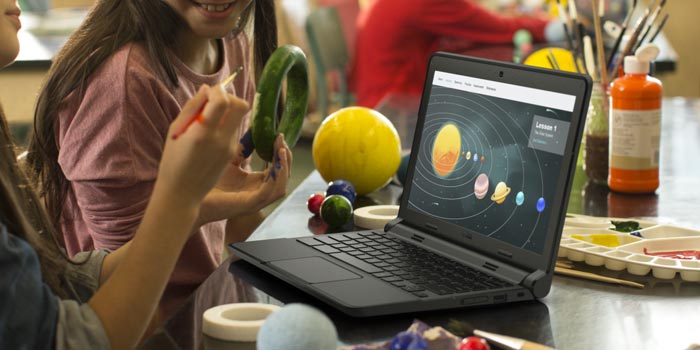 The large display of 10.1 inches offers more space for getting work done and visuals are delivered in either HD or FHD resolutions. What’s more, Dell says that the Android slate is certified with Google Play for Education. The company is yet to disclose the technical information about the duo, but we do know what the Google-powered device will offer thanks to previous leaks.

The Venue 10 is said to have NFC connectivity and be powered by a 1.8GHz quad core Intel Atom Z3735F processor. It’ll also carry 2GB RAM and 32GB of internal storage on the inside along with 5MP rear and 1.2MP front cameras on the outside. Coming to the Chromebook 11, it’ll offer an 11.6-inch display and be powered by a Bay Trail-M Celeron processor.

Dell Chromebook 11 specs at a glance: