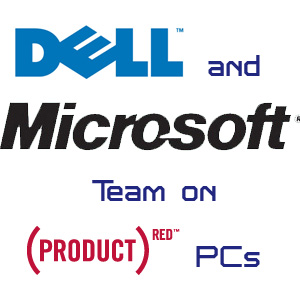 The AIDS treatment initiatives in Africa now have Dell supporting the noble cause. Dell has joined hands with Microsoft to sell an exclusive array of personal computers to help the project.

Under the program, Dell will offer special crimson-red version of its XPS range of systems. These PCs will be powered with Microsoft’s Vista Ultimate (Product) RED. $50 for a laptop and $80 for a desktop will be donated to the Global Fund, which finances health programs in Africa.

According to an article NY Times, Dell will offer the XPS M1530 and M1330 notebooks along with the XPS One desktop under the (RED) product range.

Product RED traces back to October 2006. That’s when Apple joined hands with Bono, the front man of the popular band, U2. Together they planned to offer a special edition of the iPod Nano that supported Bono’s charity dubbed Red, which fights diseases in Africa, mainly AIDS. Red has been founded by Bono along with Bobby Shriver.

The PCs will go on sale on Friday, January 25 in the U.S. followed by 30 other countries on January 31.

Other companies such as Motorola and clothing retailer The Gap also donate a part of their sales for the cause.