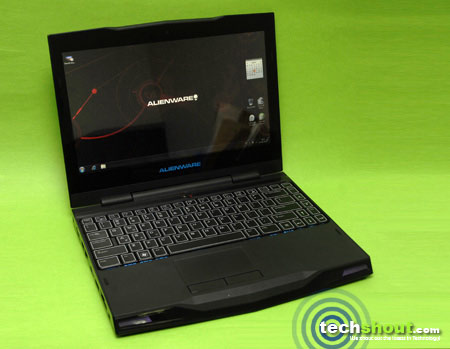 The Dell Alienware M11x notebook took a long time to move onto shelves after it was first unveiled at the CES 2010. We felt that an 11” notebook which threatens to blow one away ought to be capable of doing so or it’s an empty threat. This only meant that we had to examine the device closely and see if it could live up to the gaming-centric reputation it boasts of enjoying. The moment we took this notebook into our arms, we couldn’t help but wish for those days when ‘Beam me up, Scotty!’ was still a fashionable and less hackneyed catchphrase. As it stands, nostalgia stopped invoking attention as a medical category ages ago; so no one’s going to be interested in our Star Trek fascination. We’re just going to jot down a review of the M11x instead, though we might add that we were a bit disappointed on discovering first rate about the lid not opening to eerie UFO-inspired sound effects. 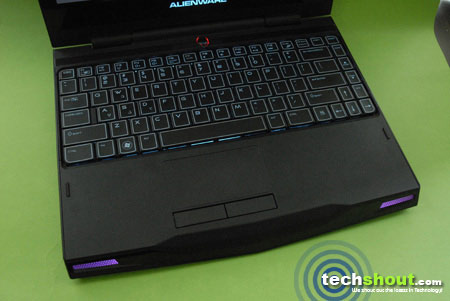 Right away, the M11x has a sturdy black body that makes you want to drop it only because it looks and feels robust enough to survive all kinds of things thrown at it. Is it just us or do the alien head motifs look more at home on this notebook than it could possibly appear on a UFO? There’s a glowing white alien head logo on the lid that cuts it somewhere between gloss and matte. You’ve even got to press an alien head on the deck to start up the notebook that takes around 30 to 40 seconds before it comes to life. This button also serves as a convenient way of locking the device when not in use. The color customizable LED lighting effects for the keyboard, hive-inspired speakers, start up button and the Alienware logo on the screen’s base are like Christmas lights to the gaming buff. They can be changed or turned on/off via the Alien FX keyboard shortcut or by accessing the icon sitting on the taskbar. If Razer made notebooks, we’re imagining something like this with the company’s neon green serpent logo on it. Although Razer’s not reported any product designers gone missing as yet, our minds keep going back to the company each time we lay eyes upon this gizmo. But then there’s the fact that Alienware’s been around longer than Razer. The ports littering the M11x’s chassis include those for FireWire, Ethernet LAN, high-speed USB 2.0, headphones, mic in, VGA and DP/HDMI apart from the media card reader slots. The notebook’s overall design is inescapably masculine with its lack of curves and thoroughly black color scheme. 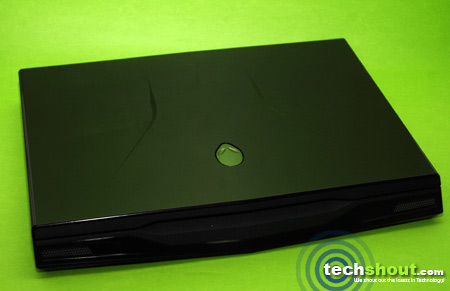 The Synaptics touchpad spread out on the deck is covered with almost imperceptibly raised dots, while the left and right mouse click buttons are clearly spelled out below it. The palm-rest area is pretty generous too, but whoever heard of a hardcore gamer making do with a touchpad instead of a mouse for any kind of PC gaming? Dell seems to have given this notebook’s screen an extra dose of gloss. Playing Counterstrike or Quake on this gizmo rests somewhere between impossible and ‘only if you’re dealing with brightly lit in-game surroundings’. Though the incredibly shiny screen may look very impressive when coupled with the LED lighting initially, you’ve got to play on it to realize what a big downside a glossy screen can present. Apart from the distracting Alienware logo mentioned earlier, there’s also the fact that we expected Dell to exploit every opportunity to increase the screen estate and give us an edge-to-edge display on this baby. You may not be able to shrug off the feeling that you’re missing out on a slice of game viewing angles with the limited screen size. The 1.3GHz Intel Core 2 U4100 CPU lends the device its processing power as it hops along with 2GB of installed RAM and runs the Windows 7 Home Premium edition OS. 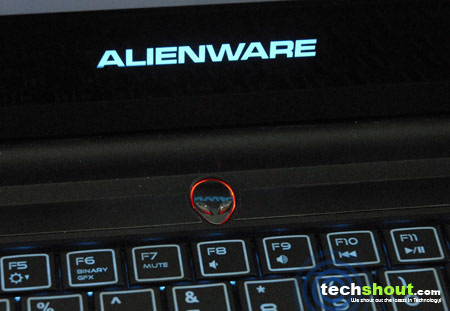 We had a nice go at the single player demo of Crysis game that comes pre-loaded onto this notebook. Considering how graphically rich this game is, the 1GB GDDR3 Nvidia GeForce GT 335M card really helps it along without noticeable lags. If the game refuses to start up at first, you’re probably playing in low performance or balanced mode instead of the high performance that’s required. Even when the high performance mode does kick in, you may still bump into a slight lag now and again while playing this game. The two front speakers aren’t a huge talking point since they don’t perform all that badly or exceptionally well and in-game audio sounds as good as it would do on any average portable PC. As for the keys set out on the keyboard, they’re fairly large though they don’t seem to have the amount of dip that can be important to a lot of gamers. If you’d mind that aspect of it, you’ll notice that the size of the keys combined with their square shape allows you to hit the right keys quite accurately. The resolution of this 11.6″ screen can be adjusted from anything between 800 x 600p to 1366 x 768p and the orientation rotated to portrait, landscape or portrait flipped and landscape flipped should you wish to play or work on the M11x from a refreshingly different angle. It took us a while or two hours to be precise, before we could drag ourselves out of the Nanosuit (while leaving our hearts behind in it) and explore the rest of this sci-fi themed Dell Alienware M11x. 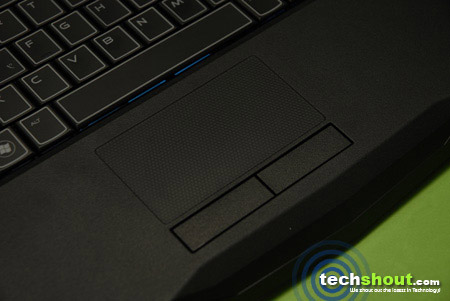 The rest of this device does not differ much from what Dell usually has to offer. We struggled a bit with opening and closing applications as well as surfing the web until we realized that we’d forgotten to take down the battery consumption mode by a notch after playing the said game demo. There’s nothing about the Dell Alienware M11x that would disappoint the average user who isn’t a gaming fan, though why they’d want to buy it except for the special effects isn’t something we’d bother to lose time over comprehending. The internet surfing experience is decently quick and there’s a webcam on the bezel for video chatting. Watching movies supported by the Nvidia graphics or Intel’s GMA would have felt better had the sound quality been consistent with the smooth graphics. You can choose to order an HDD or SSD for storage, an external optical drive and a serving of overclockable Intel i5, i7 or Core 2 Duo processors as part of the main configuration options. If you’re not into gaming, you probably missed a turn and ended up here instead of reaching a retailer that sells 11” laptops for less cash. Lastly, the M11x’s 8-cell battery, which happens to be of the integrated variety, can take you through a little less than five hours of gaming in high performance mode or around seven hours of normal PC use in balanced power mode.

Just the fact that a graphically rich title like Crysis can be played on this notebook tells you that it’s a great device for gaming though we wish Dell would throw in a free mouse because a touchpad is just not good enough for gaming needs.

The almost 5 hours of battery life is not bad at all for the gaming performance it delivers with the help of Nvidia expertise.

The Dell Alienware M11x also scores high on the sci-fi themed design aspect that allows for a bit of personalization with the customizable LEDs.

The screen can be distractingly reflective if you’re moving through dark in-game environments or merely watching a movie with a lot of black in the background or foreground.

There’s no in-built optical drive on the notebook; need we say more?

What’s great about the Dell Alienware M11x notebook is that Dell’s taken some powerful performance as well as graphics and packed it into a very portable form factor which could be seen as reasonably priced if you compare it to other gaming-centric notebooks in the market. If that wasn’t good enough, it supports 3D too. The price which starts at Rs. 70,091, takes away from the elitist gaming equipment reputation that Alienware built up around the brand. Dell’s probably set the standard for what modest sized gaming notebooks should be like with the good job they’ve done on this one. We like the personalization options from the customizable LED lighting right down to the laser-engraved user nameplate. The notebook’s getting an 8.8 out of 10 rating from us.