Local tablet manufacturers in the UK are about to face some competition in the affordable segment where even the £119 Tesco Hudl, £99.99 Argos MyTablet and the £99.99 Galaxy Tab 3 have been out priced by the UbiSlate. The most cost-efficient model in Datawind’s lineup is the UbiSlate 7Ci which is the commercial version of the Aakash 2, priced at just £29.99. Additionally, the company has also launched the 7C+ and the 3G7 tablets in the country.

The UbiSlate 7Ci is even below the entry-level standards for today, but it does have enough power to deliver a basic Android experience. The device has a 7-inch WVGA touchscreen and it’s powered by a 1GHz Cortex A8 processor with 512MB of RAM. 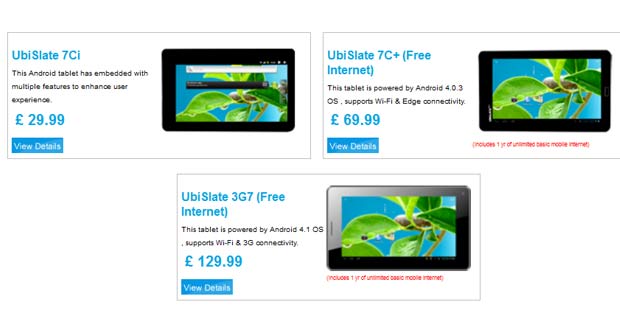 Storage is in the hands on 4GB flash memory and a microSD card slot. Additionally, the 7Ci has Wi-Fi connectivity and it runs on Android Ice Cream Sandwich. The UbiSlate 7C+ is the second tablet on the list. Priced at £69.99, it also runs on version 4.0 of Google’s mobile OS. The hardware components here are essentially the same as the 7Ci, but the 7C+ model comes with a SIM card slot for data access and voice calling.

The last one on the list is the Ubislate 3G7 which is essentially an upgraded model in the series. The device rocks a dual core processor clocked at 1.2GHz with 512MB of RAM and 4GB of internal storage. Furthermore, it comes with 2G and 3G cellular support, a 7-inch 1024 x 600p display and around 3 hours of battery life for £129.99.

Pocket-lint notes that the UbiSlate devices are available for purchase through the company’s UK website.