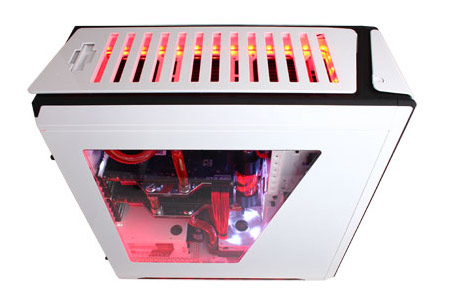 Whether the CyberpowerPC Zeus Thunder 1000, 2000, 3000 and Max can call their Advanced Hydro Liquid Cooling technology the stuff of legend or not, may be a debatable idea. But the desktops will indeed arrive with AMD FX CPUs, just like the new CyberpowerPC Zeus Lightning 1000 and 2000 variants which are also part of the announcement.

Each of the six Zeus members packs all of its components into an NZXT Switch 810 chassis. The Thunder series rigs are embedded with the second generation Intel Core i7-3820 Sandy Bridge-E quad core CPUs clocking it in at 3.6GHz, with Hyper-Threading support and 10MB L3 cache. The Lightning desktops feature the AMD FX series native 8-core CPUs that accommodate 3D gaming and some easy ‘mega-tasking.’

Covered in a rather tame white shade, the exterior sports a lot of connectivity options inclusive of an SD card reader and dual USB 3.0 ports. It also flaunts hybrid fins which can be switched to open up and enhance air flow or closed for better sound reduction. A factor that runs common in all the Zeus PCs is the ability to affix a maximum of ten 120mm fans as well as an Advanced Hydro Liquid Cooling kit. 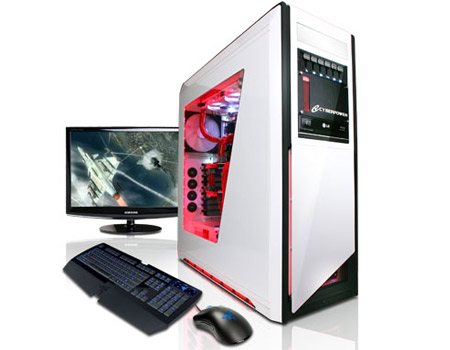 In terms of the GPU alternatives, potential users will be looking at AMD and Nvidia apart from the freedom to load up the rig in question with multiple video cards supporting CrossfireX or SLI graphics performance. Intel, Corsair, OCZ or Kingston happen to be the SSD brands of choice for the new Zeus lineup and Kingston HyperX or Corsair Vengeance DDR3 memory are counted among the memory module options.