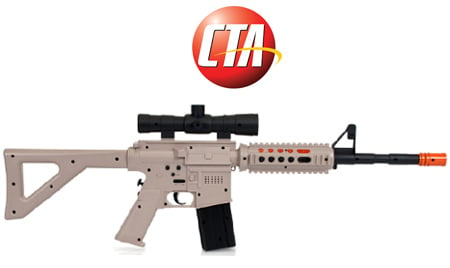 The lightweight controller is designed to look like an assault rifle, with the trigger serving as the R1 button for realistic gameplay. It allows players to dive into FPS games in full sniper pose and features a removable scope and stock. Two AA batteries and an on/off switch power the device. The OEM Sony PS controller buttons such as the D-pad, start and select buttons and PS button are fitted onto the accessory.

The Assault Rifle also hosts clickable thumb sticks for functions like strafing, steadying the weapon, running and surveying the game environs. Its integrated speaker renders single shot, three-shot burst or fully automatic sound effects in sync with on-screen action. These may be turned on or off according to user preference and can be activated even if the controller isn’t synced with the gaming unit.

The controller can be connected to the PS3 via the USB dongle key and home button that offers wireless synchronization. Four LED lights built into the device indicate the controller port selection. A USB dongle key, scope and stock are bundled in with the Assault Rifle controller that’s out on Amazon for $64.99.