Crysis Warhead: Next Installment of the game announced by EA AND Crytek 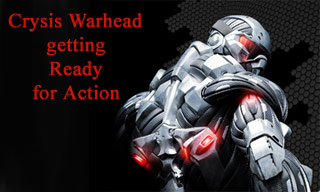 Creators of multi-award winning action games such as Far Cry and the ever popular Crysis, promise a huge dose of action amidst explosions and hardcore shooting with the introduction of Crysis Warhead. The first shooter game Crysis which shot to popularity and fame brings along its next installment in the form of Crysis Warhead.

Crysis Warhead will present the Nanosuit of Sergeant Sykes also known as Psycho whose rough and tough nature would need to be faced by the players. Psycho fills his pockets and pride with an arsenal of fully customizable weapons and new vehicles which will fill the game with a lot of action and explosions that will put you into a trance.

“We were very pleased with the reception of Crysis from both gamers and media after our launch last year,” said Cevat Yerli, CEO and President of Crytek. “That being said, one of the key principles of our studio is to always raise the bar. With Warhead, we are focusing on refining our storytelling and game performance, while also delivering more of the visually stunning graphics and immersive, free-roaming gameplay everyone loved in Crysis.”

Initially the Crysis game started off with the storyline where US and North Korea come together and battle the Alien ship that has created havoc all over. Now the next addition to the action-filled game brings more aggression and intensity into the game. The shooter game Crysis Warhead will also feature new multiplayer options that will allow your friend to punch in the additional action to the game. EA has not yet announced the launch date of the game, but it seems that Crysis Warhead is set to heat the US summers this year.