Critical Security Fixes for QuickTime and iTunes issued by Apple 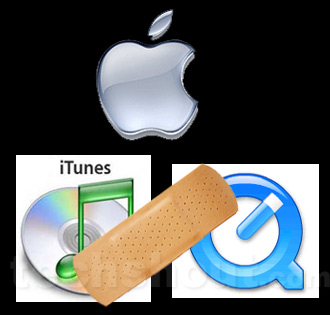 This Monday, Apple Computer released a collection of 8 security fixes and updates for the OS X and Windows versions of its QuickTime multimedia software. Besides, Apple also released a security update for its iTunes software. So, if you happen to have the Apple Software Update application installed on your machine, you might have already seen it downloading the latest updates to both Apple QuickTime and Apple iTunes.

According to Apple, the QuickTime security update version 7.1.15 delivers a number of bug fixes and also addresses critical security issues. These fixes are meant for 8 flaws, which affect current versions of QuickTime for Windows Vista, XP and 2000. Moreover, 7 of the vulnerabilities also affect OS X versions 10.3.9 and above.

In its security alert, Apple has confirmed that the vulnerabilities in QuickTime could expose both Macs and Windows PCs to cyber attacks. In all cases, an attacker could design a malicious file, when opened with QuickTime, could give the attacker full control over a computer running the software.

Besides, Apple also pointed out that the flaws are related to the way in which QuickTime handles a number of formats. The security update, thus repairs problems in the way the software handles QuickTime, MIDI, PICT, 3GP and QTIF files. QuickTime 7.1.5 is available as a 41.4MB download for Mac users and an 18.6MB download for Windows users.

Apple Computer also released an update for its iTunes software. In a brief set of release notes accompanying the new release, Apple said, “”Using iTunes 7.1, you can now enjoy your favorite iTunes movies, TV shows, music, and more from the comfort of your living room with Apple TV.”

iTunes 7.1 also supports a new full screen Cover Flow and improved sorting options that lets users decide how iTunes should sort their favorite artists, albums and songs. This update for iTunes is available as a 28MB download for Mac users and as a 36.1MB download for Windows users.

The iTunes 7.1 and and QuickTime 7.1.5 updates are available for download from Apple’s Web site, or via the software update mechanism in Mac OS X.