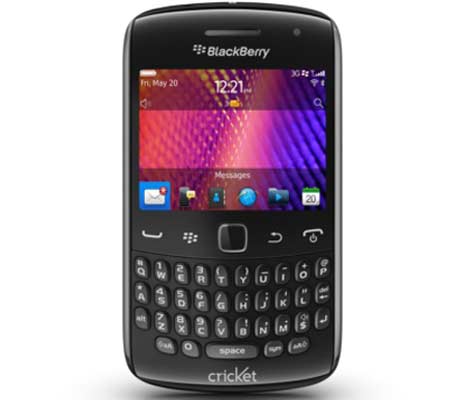 The Cricket BlackBerry Curve 9350 has been made available for all those who wish to take advantage of the social features offered by the manufacturer in question. This second RIM smartphone from the carrier runs BlackBerry 7 OS and sticks to the conventional BlackBerry form factor.

The sleek and stylish phone is an ergonomically designed device, complete with a physical QWERTY keypad for accuracy while typing and an optical trackpad to facilitate easy navigation. It has been included with the push email service as well as BBM and other social features. This NFC enabled smartphone comes with Bluetooth and built-in GPS, while it ensures wireless internet connectivity, courtesy Wi-Fi and 3G compatibility.

“The introduction of the BlackBerry Curve 9350 smartphone is another step in our ongoing effort to bring our customers a diverse selection of operating systems and phones from which to choose,” stated Matt Stoiber, senior vice president, devices for Cricket. “The BlackBerry Curve 9350 has what customers need to keep up, including a powerful processor, fast browser and a 5 MP camera with flash.”

The Curve 9350 flaunts a 2.4-inch display and is armed with a 5MP camera, capable of recording videos. Its onboard memory can be expanded up to 32GB using a microSD card. The handset is fueled by an 800MHz processor and it draws power from a standard lithium ion battery. Also, it ships with a 2GB microSD card, a USB cable and charger. Needless to say, it can be used to get access to the BlackBerry App World.

The Cricket BlackBerry Curve 9350 price and availability details have been declared. It is now up for grabs for $199.99 along with an all-inclusive smartphone service plan of $55 per month. Customers are not required to sign a contract.